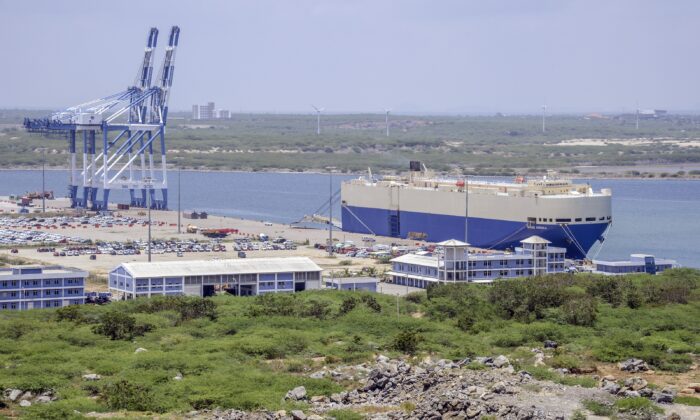 The Grand Aurora vehicle carrier sits moored at Hambantota Port, operated by China Merchants Group, in Hambantota, Sri Lanka, on March 28, 2018. Under the overwhelming burden of the Chinese debt, the Sri Lankan leased the port to Beijing for 99 years. (Atul Loke/Bloomberg via Getty Images)
Thinking About China

Chaos and failure in Sri Lanka signal problems throughout the developing world that will make trouble for China. Loan losses in Sri Lanka and elsewhere will of course add to China’s increasingly severe debt overhang. Further, events in Sri Lanka will raise questions among others about participating in Beijing’s vaunted Belt and Road Initiative (BRI) and in so doing, will interfere with Beijing’s global plans.

Sri Lanka is, of course, an extreme case. It seems to have suffered a perfect storm. Yet, if problems are less severe elsewhere, all the elements of Sri Lanka’s disaster exist throughout the developing world.

Problems began with the COVID-19 pandemic. Sri Lanka depended heavily on tourism. Of course, that shut down with the COVID-19 emergency. Tourism is less important elsewhere, but the pandemic universally interfered with important economic links the world over. The loss of the essential support for the economy impelled the Sri Lankan government and its businesses to use external debt more heavily than previously, and that led to further problems, as it has elsewhere.

The debt imposed by China’s BRI immediately took center stage. As Sri Lanka’s debt burden grew, the nation and its businesses had increasing trouble servicing the arrangements. Things became so intense that the Sri Lankan government sold off some 70 percent of Hambantota International Port, its second largest port, to China to discharge what it owed on that BRI development project.

More than just China was involved. The greater reliance on debt generally—in Sri Lanka and much of the developing world—made all more vulnerable to new strictures prevalent in global financial markets. The western emphasis on what is called ESG (environment, social, and governance) weighed especially heavily. To raise its ESG score and thus appeal to lenders, Sri Lanka’s government decided to ban the use of synthetic fertilizers, an act that severely limited the island’s production of tea, a key export, and rice, a staple. With limited export earnings, Sri Lanka had to rely even more on debt.  Meanwhile, rice production fell some 20 percent. The island ceased to be self-reliant in this essential. Reflecting all this, inflation took off, rising 50 percent in the last year, and 80 percent for food.

If Sri Lanka were alone, its troubles would mean little to China or to the larger world. However similar, if less extreme difficulties servicing excessive debts have cropped up throughout the developing world, including many BRI clients. Pakistan stands out, not only because it is larger than many BRI participants, but because it is something of a jewel in this Beijing initiative.

Of the 144 nations that participate in the BRI, Pakistan alone constitutes fully 10 percent of all BRI debt. At last count, Pakistan owed some $25 billion to Chinese state-owned banks: about 30 percent of all Pakistani debt to the outside world and fully 40 percent of the $60 billion in capital China has dedicated to BRI generally. Pakistan’s problems are less severe than Sri Lanka’s, but the difference is one of degree, not kind. And the country is having difficulty servicing its debt load, to China and others. The weight on the economy is also clear. Inflation in Pakistan has risen to 20 percent over the past year, and fuel prices are 90 percent above year-ago levels.

This reality, as it repeats throughout the developing world, confronts Beijing with two problems.

The first is purely financial. The figures for Sri Lanka, Pakistan, and the whole of the BRI may look small next to the $300 billion failure of the Chinese real estate developer, Evergrande, but neither can Chinese finance stand any added burden on top of that disaster—as well as the failures of other Chinese developers that have also become apparent.

Even before there was much talk of failures in the developing world, China’s overall debt burden had grown to exceed 270 percent of its gross domestic product (GDP) at the end of 2020, one of the highest percentages in the world. Since then, that burden has doubtless grown and become even less likely to be paid in full. China’s highly centralized and controlled system might hide the damage well, but the strain of debt, especially failed debt, cannot help but weigh on Chinese economic prospects.

And then there is the fate of the BRI. In financial terms, the monies involved are small next to China’s domestic debt overhang, but the initiative is nonetheless critically important to Beijing’s global ambitions. In the program, China gains global influence by lending participating countries the funds needed to pay for Chinese-led infrastructure projects. Accordingly, multiplying failures throughout the developing world naturally raise a reluctance among smaller, poorer nations about participating in BRI at all. At the very least, recent events will slow the expansion of the program, and potentially shrink it, leaving Beijing with little of the influence it sought from BRI. It will also leave Beijing with a pile of bad debt.

Difficult as all this is for Chinese economics, finance, and diplomacy, none of it portends any collapse in China. To paraphrase the great Adam Smith, there is a lot of ruin in a country. But while not portending disaster, the picture nonetheless suggests a major setback for Beijing. At the very least, it will now take a lot longer for China’s leadership to reach the financial, economic, and geopolitical heights it had hoped to scale.