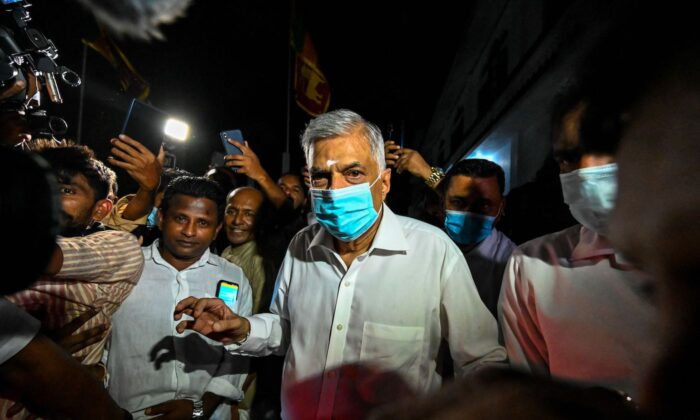 “We are now facing a far more serious situation beyond the mere shortages of fuel, gas, electricity, and food. Our economy has faced a complete collapse,” Prime Minister Ranil Wickremesinghe told Parliament on June 22.

“It is no easy task to revive a country with a completely collapsed economy, especially one that is dangerously low on foreign reserves.”

Sri Lanka will hold a credit aid conference with India, China, and Japan for loan packages. Wickremesinghe said the goal is to reach a “general consensus” on the lending processes as each country has its own system for granting loans.

“However, there have been some conflicts and disagreements between us in the recent past. We are working towards resolving these and fostering friendly relations once again,” he added.

The government also will seek help from the United States, with representatives from the U.S. Treasury Department visiting Sri Lanka next week.

Wickremesinghe said that Sri Lanka has received a $4 billion credit line from India and requested additional loan assistance from the neighboring country.

A top-level Indian delegation is expected to meet with Sri Lankan leaders on June 23 to discuss extending an additional $500 million credit line to Sri Lanka for the purchase of oil, local media Daily Mirror reported.

“But even India will not be able to continuously support us in this manner. Even their assistance has its limits. On the other hand, we too must have a plan to repay these loans. These are not charitable donations,” Wickremesinghe added.

He said that negotiations with the International Monetary Fund (IMF) had made progress, with the government expecting to reach an official level agreement with the IMF by the end of July.

“If we receive the IMF seal of approval, the world will once again trust us. It will help us to secure loan assistance as well as low-interest loans from other countries in the world,” he said.

“The Ceylon Petroleum Corporation is $700 million in debt. As a result, no country or organization in the world is willing to provide fuel to us. They are even reluctant to provide fuel for cash.”

Sri Lanka also has requested that China amend the terms of a $1.5 billion yuan-denominated swap facility that it signed last year, which stipulates that the fund can only be used provided that Sri Lanka has enough foreign reserves to last three months.

The country is on the verge of bankruptcy, with its foreign exchange reserves plummeting by 70 percent in the past two years. The government stated on April 12 that it was suspending foreign debt repayments.

About 10 percent of Sri Lanka’s $51 billion external debt is owed to China, and the government had requested help from China to restructure its debt obligations.

Wickremesinghe said that Sri Lanka wouldn’t be experiencing its worst economic crisis in decades if the government had acted sooner.

“If steps had at least been taken to slow down the collapse of the economy at the beginning, we would not be facing this difficult situation today. But we lost out on this opportunity. We are now seeing signs of a possible fall into the very bottom,” he said.

Thousands of Sri Lankans have taken to the streets to protest the government’s mishandling of the country’s economic crisis, leading to the resignation of then-Prime Minister Mahinda Rajapaksa on May 9.

The United Nations launched a worldwide public appeal on June 9 to provide $47.2 million of aid between June and September to 1.7 million people whose livelihoods and food security are most at risk.