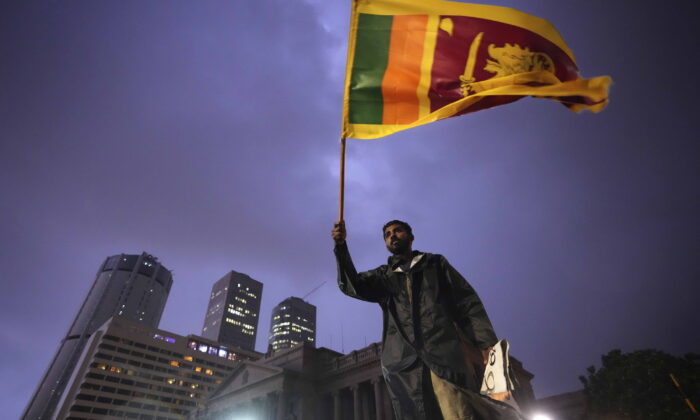 A man waves a Sri Lankan national flag as he stands on a barricade blocking the entrance to president's office during a protest in Colombo, Sri Lanka, Monday, April 11, 2022. Thousands of Sri Lankans protested calling on the country's president Gotabaya Rajapaksa to resign amid worst economic crisis in history. (AP Photo/Eranga Jayawardena)
Asia & Pacific

“From today, I will not be involved in any government activities, but I cannot and will not step away from politics,” he told reporters. “The aim is to allow someone else to be appointed to parliament in my place from the party.”

Basil, however, refuted claims that he had failed to control Sri Lanka’s economic fallout.

“I was the person to send the first letter to the [International Monetary Fund] after becoming finance minister. It is the work I started that is now being taken forward,” he said. “I have no regrets.”

Basil was appointed finance minister in July 2021, following the appointment of his two brothers into the cabinet—Mahinda as prime minister and Chamal as a cabinet minister—by President Gotabaya Rajapaksa.

Sri Lanka’s cabinet ministers, including Basil and Chamal, resigned en masse in April amid violent protests over the government’s mishandling of the economic crisis. Mahinda resigned in May amid the escalating unrest but retained his seat in parliament.

President Gotabaya Rajapaksa told Bloomberg last week that he will continue to serve the remaining two years of his term but will not seek reelection.

Political veteran Ranil Wickremesinghe was sworn in as the country’s prime minister for the sixth time on May 12, replacing Mahinda, despite having only one seat in parliament.

He is now leading efforts to resolve the country’s economic crisis with negotiations with the IMF and lending partners, including India, Japan, and China.

Wickremesinghe said that Sri Lanka has requested that China amend the terms of a $1.5 billion yuan-denominated swap facility because the country is in need of at least $6 billion to stay afloat over the next six months.

The swap agreement, signed by the Central Bank of Sri Lanka in March 2021, stipulates that the fund can only be used provided that Sri Lanka has enough foreign reserves to last three months.

“We have not had foreign exchange reserves for three months since the loan was taken. Our former officials took loans to deceive the country,” Wickremesinghe said in a speech in Parliament.

“We will not be debt-free under that condition. We have requested the Chinese government to consider removing that condition from the agreement that has been signed with them.”

Sri Lanka is on the verge of bankruptcy, with its foreign exchange reserves plummeting by 70 percent over the past two years, leaving it struggling to pay for essential imports. Additionally, the country must settle a $4 billion debt this year.