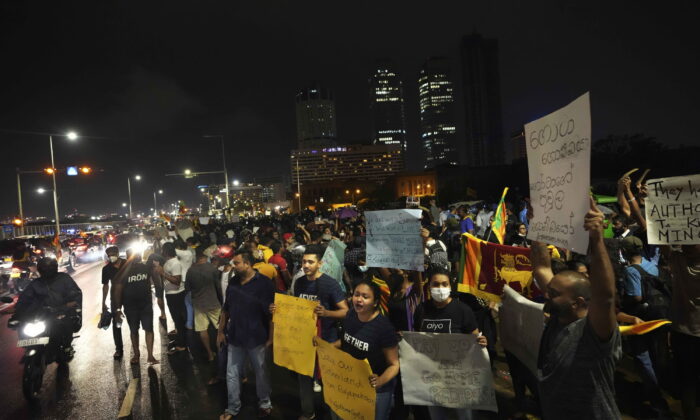 Sri Lankans during a protest outside the president's office in Colombo, Sri Lanka, on April 11, 2022. (Eranga Jayawardena/AP Photo)
Economy

COLOMBO, Sri Lanka—Sri Lanka is suspending its repayment of foreign debt, including bonds and government-to-government borrowing, pending the completion of a loan restructuring program with the International Monetary Fund to deal with the island nation’s worst economic crisis in decades, the government announced Tuesday.

Sri Lankans in recent months have endured fuel and food shortages and daily power outages. Most of those items are paid for in hard currency, but Sri Lanka is on the brink of bankruptcy, saddled with dwindling foreign reserves and $25 billion in foreign debt due for repayment over the next five years. Nearly $7 billion is due this year.

“Sri Lanka has had an unblemished record of external debt service since independence in 1948,” the Ministry of Finance said in a statement. “Recent events, however, including the effects of the COVID-19 pandemic and the fallout from the hostilities in Ukraine, have so eroded Sri Lanka’s fiscal position that continued normal servicing of external public debt obligations has become impossible.”

The ministry said the IMF has assessed Sri Lanka’s foreign debt as unsustainable, and that staying current on foreign debt payments is no longer a realistic policy.

In addition to seeking help from the IMF, the government has turned to India and China for help in dealing with shortages.

“The government intends to pursue its discussions with the IMF as expeditiously as possible with a view to formulating and presenting to the country’s creditors a comprehensive plan for restoring Sri Lanka’s external public debt to a fully sustainable position,” the ministry said.

Central Bank governor Nandalal Weerasinghe told reporters that the announcement on suspending foreign debt payments was urgent because Sri Lanka is due to repay nearly $200 million next week and if the country can’t raise that money, it would face a “hard default” leading to worse repercussions.

The Central Bank appealed to Sri Lankans living and working abroad to donate foreign currency into four government-run bank accounts set up for government officials to purchase essentials like food, fuel, and medicine for distribution to the population urgently because talks with the IMF will take time to generate economic improvement. The Central Bank tweeted that a three-member committee will assure transparency in distribution of the funds and promised to make public quarterly financial statements.

Sri Lankans have been forced to wait in long lines to buy cooking gas, fuel, and milk power and doctors have warned there is a catastrophic shortage of essential drugs in government hospitals.

Protesters camped out around the president’s office for a fourth straight day demanded the resignation of President Gotabaya Rajapaksa, holding him responsible for the economic crisis. Supporters of the protesters who are also calling on the ruling Rajapaksa family to quit supplied drinking water and food to the demonstrators. Muslim protesters broke their Ramadan fasting at the site to share food with people around them.

Much of the anger expressed in weeks of protests has been directed at the Rajapaksa family, which has held power for most of the past two decades. Critics accuse the family of borrowing heavily to finance projects that have earned no money, such as a port facility built with Chinese loans.

Prime Minister Mahinda Rajapaksa, a former president who is the current president’s older brother, sought in a speech Monday night to reassure people that the government is working to resolving the country’s financial problems.

“We are embarking on an enormous program to overcome the crisis we face today. Every second spent by the president and this government is used up exhausting avenues to rebuild our country,” he said.

Rajapaksa refused to yield power, saying the governing coalition will continue to rule Sri Lanka because opposition parties rejected its call for a unity government.

The crisis and protests prompted many Cabinet members to resign. Four ministers were sworn in as caretakers, but many of the key government portfolios are vacant.

Parliament has failed to reach a consensus on how to deal with the crisis after nearly 40 governing coalition lawmakers said they would no longer vote according to coalition instructions, significantly weakening the government.

But with opposition parties divided, they have been incapable of forming a majority to take control of Parliament.