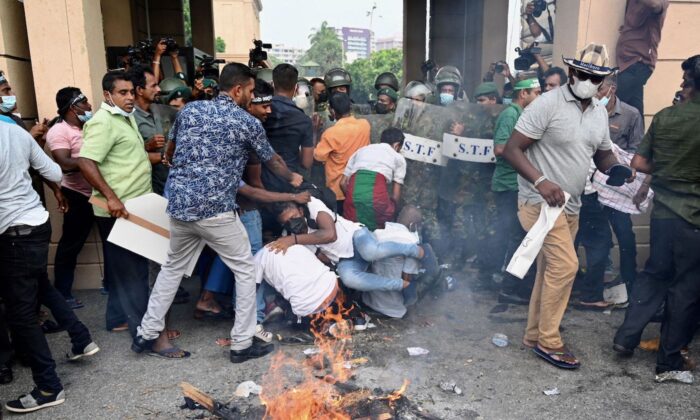 Opposition activists protest against rising living costs at the entrance of the president's office in Colombo on March 15, 2022. (Ishara S. Kodikara/AFP via Getty Images)
World

Sri Lanka’s government declared a state of emergency on Friday following a violent protest outside the president’s private residence, as public outrage mounts over his government’s handling of the country’s economic crisis.

“Many of those involved in the protest have been arrested, and the majority of them have been confirmed to be organized extremists. They had led the protest shouting the slogans, ‘Let’s create an Arab Spring in this country,’” it said on Facebook.

More than 50 people were arrested, according to police, prompting the government to impose an indefinite curfew in and around Colombo on Friday to quell sporadic protests that have broken out over shortages of essential items.

Police reportedly fired tear gas and water cannons to disperse demonstrators near Rajapaksa’s residence on Thursday, after they torched police and army vehicles.

The military has since been given the authority to arrest suspects without warrants. Rajapaksa said the decision was taken in the interests of public security, the protection of public order, and the maintenance of supplies and essential services.

“We are monitoring developments and are concerned by reports of violence in Sri Lanka. Calling for restraint from all groups,” the U.N. representative in the country, Hanaa Singer-Hamdy, said in a tweet.

Sri Lanka’s government imposed a 10-hour power cut on Wednesday due to a lack of foreign exchange to pay for fuel imports. The power outage was extended by three hours on Thursday, resulting in a 13-hour rolling nationwide blackout.

Some hospitals were forced to suspend routine surgeries due to acute shortages of fuel and life-saving medicines.

The country’s foreign exchange reserves have fallen 70 percent in the last two years to about $2.31 billion, leaving it struggling to pay for essential imports. Sri Lanka also has to repay a debt of about $4 billion this year.

The International Monetary Fund said Thursday that it will initiate discussions with Sri Lanka on a possible loan program. The Sri Lankan government is also in talks with India to secure an additional credit line of $1 billion to import essentials. This is on top of the $1 billion support extended by India to Sri Lanka in March.

Sri Lanka’s government had also asked China to help restructure the country’s debt obligations and requested that China provide a concessional trade-credit plan for Chinese imports, but it remains unclear whether Beijing will grant the request.