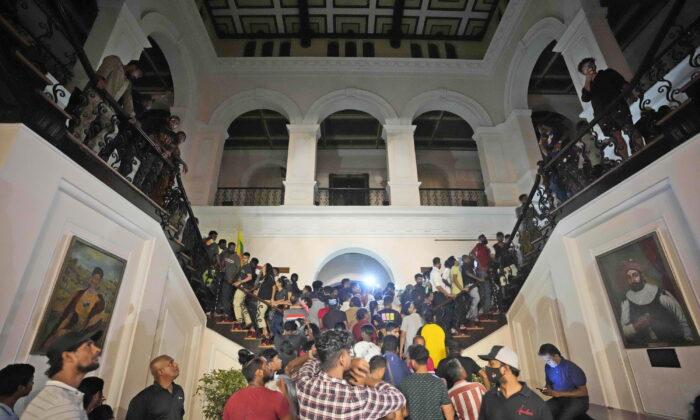 Sri Lanka and the Start of a Starvation Pandemic

Poor governmental decisions in many countries are leading to mass starvation—and public retaliation against their governments.

Sri Lanka’s current dire problems—in which popular street action has thrown out, first, a sitting prime minister, then his replacement, and then the sitting president—seem likely to be a precursor to similar actions elsewhere in the world.

And Sri Lanka’s problems are nowhere near being resolved as its population starves.

Moreover, eradicating the immediate symptoms of popular discontent doesn’t guarantee that underlying structural problems have been eliminated. A significant and growing number of countries are presently facing mass discontent over economic and security issues, and some are close to the Sri Lankan situation.

Sri Lanka’s growing economic and political crisis seemed to have moved a step closer to resolution on July 11 when Prime Minister Ranil Wickremesinghe announced—only two months after being appointed to his position—that he and his entire Cabinet would resign, along with President Gotabaya Rajapaksa, to clear the way for a new all-party unity government.

On July 13, Rajapaksa fled Sri Lanka with his wife, Ioma, to Male, the capital of the Maldives, on an old Sri Lankan Air Force Antonov An-32 twin-turboprop transport aircraft. Maldives air traffic control refused permission for the aircraft to land until the speaker of the Maldives Parliament intervened. There was no evidence that Rajapaksa had provided the constitutionally necessary written resignation to the speaker of Parliament, but, de facto, Wickremesinghe became acting president and the focus of new mass public protests.

Therein lay some of the challenges.

Constitutionally, once the Sri Lankan president and prime minister formally resign (and the president must resign by letter to the speaker of Parliament), the speaker could then be appointed as acting president. Parliament would then vote within 30 days for a new president to complete the current presidential term, which is scheduled to end in 2024.

The problem of creating the new “all-party” government would lie, however, in that Parliament itself remains dominated by the Rajapaksa-dominated People’s Freedom Alliance (SLPFA), which controls 145 of the 225 seats in Parliament, with only the Samagi Jana Balawegaya (SJB), formed in 2020, with any substantial number of seats (45), and the remainder held in ones and twos by small parties.

In other words, the new government to be formed after the collapse of the Rajapaksa administration would still, in essence, be controlled by the Rajapaksa family, at least in the eyes of the protesters who had demanded an end to the Rajapaksa era.

This wasn’t lost on the protesters, who had targeted the homes of at least 40 ruling party parliamentarians in recent weeks.

However, in the interest of maintaining continuity as Sri Lanka continued to negotiate with the International Monetary Fund (IMF) over possible financial support, central bank Gov. P. Nandalal Weerasinghe would remain in his post, saying he would serve out his six-year term.

The final collapse of the Rajapaksa administration occurred because of mass protests on July 9, targeting (and occupying) the homes of Rajapaksa and Wickremesinghe. And although the prime minister and speaker of Parliament announced that the president and government would step down on July 13, the president himself remained silent. Rajapaksa had been whisked to safety just before the mob descended on his official residence. Wickremesinghe’s private home was set on fire.

Border control officials on July 12 stopped the president’s brother and former finance minister Basil Rajapaksa from flying out of Sri Lanka. Still, it was understood he finally was able to leave. Meanwhile, no word was heard from another brother, former Prime Minister Mahinda Rajapaksa, who had been removed from office on May 12 and replaced as an emergency measure by Ranil Wickremesinghe.

Sri Lanka’s economy had seemingly collapsed overnight in 2022, although the seeds of that collapse and ensuing food shortage had been sown earlier. And the COVID-19 global health crisis had meant that tourism—Sri Lanka’s economic mainstay (12.6 percent of GDP in 2019)—had been wiped out between 2020 and 2022.

For various reasons, Sri Lanka was already on the way to an economic meltdown by the time then-Prime Minister Mahinda Rajapaksa began his fifth premiership term on Aug. 10, 2020.

President Gotabaya Rajapaksa, the former prime minister’s younger brother, in May 2021 compounded the problem by instituting a policy to make Sri Lanka the world’s first fully organic farming nation, banning all importation of agrochemicals, including fertilizers and pesticides. The move was ostensibly instituted to address a rise in kidney disease—thought to be the result of fertilizer exposure—among farmers.

But food production plummeted immediately (between 20 percent and 70 percent, depending on the crop), severely affecting the local supply of foods and major export crops, such as tea. This problem, the loss of local food and export revenues, coupled with a shortage of foreign exchange holdings, escalated the country’s economic crisis.

Farmers make up some 30 percent of the Sri Lankan labor force. And their output of rice, a staple of the local diet, fell 40 to 50 percent during the growing season, known as Maha. As a result, Sri Lanka imported some 330,000 tons of rice in the first three months of 2021, compared with the 15,000 tons imported in 2020.

By May of this year, the government said that it would reinstate the use of chemical fertilizers and pesticides, but it was too late: many farmers had left the land or had been bankrupted, and no funds were available to import fertilizer. In any event, the Ukraine war with Russia, which began in February, severely affected the availability of chemical fertilizers that had previously been key export commodities from Ukraine and Russia.

At the same time, Sri Lanka was forced to default on interest payments on its sovereign debt; it had run out of cash, and the country faced the reality that it had little food and no reserves of petrol and petroleum products. Widespread and rolling power cuts followed.

Riots and protests arose against the government in major urban areas. Prime Minister Mahinda Rajapaksa resigned on May 9, 2022, and his Sri Lanka Podujana Party offered to support a new government under an opposition leader. Still, it was clear that protesters also sought the resignation of the prime minister’s younger brother, President Gotabaya Rajapaksa.

Opposition leader and former Prime Minister Ranil Wickremesinghe, 73, was sworn in on May 12, attempting to form a new unity government. Harsha De Silva, a member of the SJB, the largest opposition group in Parliament, was offered the finance ministry but rejected it, saying he would work with “the people” to remove the Rajapaksa administration. The Tamil National Alliance said the administration had “completely lost legitimacy” with the reappointment of Wickremesinghe.

A significant number of other societies face similar challenges to those of Sri Lanka, particularly in Africa. Popular discontent has recently been a key factor in other countries, such as Sudan. It looms in Iran, Egypt, Ethiopia, South Africa, mainland China, and elsewhere as food shortages begin to show. This is a starvation pandemic—caused by government decisions—that is about to burst onto the global stage.