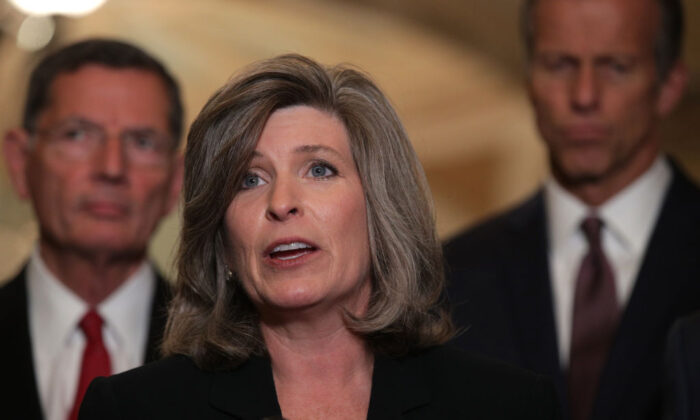 Sen. Joni Ernst (R-Iowa) handed out her monthly Squeal Award on Nov. 22, an “award” that targets wasteful government expenses. Her goal is to “cut wasteful spending and make Washington squeal,” according to her website.

Ernst’s latest award targets “pension poaching.” Elderly veterans are targeted by companies that use all kinds of tricks to deceive them out of their pension money, according to an October report by the Government Accountability Office (GAO).

One scam involves cold-calling veterans and charging them money to supposedly assist them with a Veterans Affairs (VA) pension claim. The scammers take the veterans’ credit card information over the phone.

The punishments for “pension poaching” are virtually nonexistent, Ernst said in a statement Friday. She cited an example of one scammer being ordered to pay a fine of $1. “That’s less than a parking ticket! Folks, this is outrageous and cannot continue,” she said.

“Veterans are owed the benefits they’ve earned in service to our country, and anyone attempting to take advantage of these heroes for financial gain should not only be ashamed of themselves but face serious consequences,” she said.

Ernst herself is a veteran, the first female combat veteran to be elected to Senate. She said she gives the latest Squeal Award to the VA and Congress for “failing to do enough to protect veterans from pension poaching, and allowing federal dollars to be subjected to financial exploitation.”

She is co-sponsoring legislation called the Financial Refuge for Every Elderly (FREE) Veteran Act of 2019. It would punish companies and individuals providing counseling to vets without VA licensing to do so. The punishments would include fines and/or imprisonment for up to one year.

FREE would also provide education to veterans to make them wary of scams. And it would mandate a review of fees that agents or attorneys are charging veterans to ensure those fees are appropriate.

The GAO cited an example of an elderly Kansas veteran and his wife who signed an agreement with an attorney for long-term financial and estate planning services.

The attorney charged them $31,000 in fees, but a court subsequently determined the usual fees for this service are $3,000 to $8,000.
The Kansas Supreme Court ruled that the attorney violated state professional rules of conduct and ordered a six-month suspension.

Under the proposed FREE Act, the attorney could have faced significant fines and the possibility of jail time.

The VA paid out $3.2 billion in 2018 to more than 232,000 elderly veterans and survivor beneficiaries for various forms of aid and attendance services.

The average pension for the most elderly veterans (80+) is approximately $17,000 a year, while the average survivor pension is about $11,000, according to GAO.

The full extent of pension poaching abuses is difficult to calculate, according to GAO, in part because “individuals may be too embarrassed to report that they have been victimized or hesitant to report if the perpetrator is a family member.

“Additionally, individuals may simply not recognize that they have been an exploitation victim. Measuring the extent of financial exploitation is complicated by a lack of reliable data.”

Some other ways in which elderly veterans might be vulnerable, according to GAO, include being overcharged for home care, charged for services they did not receive, and having their direct deposit payments diverted to a scammer’s bank account.

The latter problem can occur because VA does not always verify direct deposit information on applications. In contrast, the Social Security Administration verifies this information by reviewing individuals’ checks or account statements.