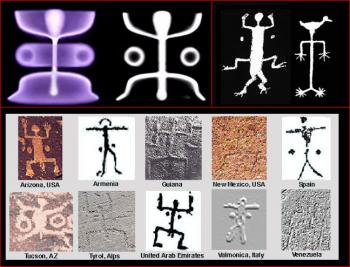 Was this recurring petroglyph pattern a familiar sight to ancient skies? (Images gathered by Anthony Peratt)
Beyond Science

Leonardo Vintini
View profile
Follow
biggersmaller
Print
Given expression throughout history among countless civilizations around the world, the human image, rendered in a few simple lines, offers an unmistakable representation of a unique spectacle occurring in the ancient skies.

A Signal of the Gods

Suddenly, someone pointed toward the sky. The afternoon sky had become red, later white, and then an intense yellow. The great power of the firmament was both beautiful and terrifying, the most frightening that the group had ever seen. It was a beautiful and painful demonstration of human insignificance before the gods.

The grand sparkles stayed in the sky for a time, enough for the natives to engrave the scene on their granite canvases. The axis of energy charged across space, in its path letting loose gigantic streams of gas, some flying upward and other flying downward.

“…only a few thousand years ago the terrestrial sky was ablaze with electrical activity. The ramifications of this possibility will directly affect our understanding of cultural roots. What was the impact of the recorded events on the first civilizations? What was the relationship to the origins of world mythology, to the birth of the early religions, or to monumental construction in ancient times?” asks David Talbot and Wallace Thornhill in their book “Thunderbolts of the Gods.”

The true origin of the “squatter” or “stickman”—as the petroglyph is also known—is probably one of the enigmas most beloved by scientists who specialize in plasma physics. This graphic representation can be found and appreciated in the archaeological legacies of dozens of ancient cultures around the world—cultures with no apparent connection or contact—prompting many intrepid scientists to consider the “squatter” more as an event of magnificent proportions common to different cultures, rather than a vague and repetitive representation of human anatomy.

A New Theory for an Old Universe

Even so, the squatter does not represent the point of origin for this fantastic theory.  It is but a lucky piece of evidence found among the great current of vanguard thought known as “The Electric Universe.”

Proponents of the Electric Universe (such as is titled the work of Donald Scott, one of the pioneers of the idea) maintain that plasma, an energetic state of matter, is the substance and force that both fills and governs the totality of nearly all elements existing in the universe. Confronting such an idea may make possible radically new explications of familiar theories such as the Big Bang, dark matter, and Einstein’s general relativity, among others.

But when proponents of the Electric Universe theory hold that plasma—recognized as the fourth state of matter and a substance filling 99.9 percent of the known universe—is responsible for planetary attraction instead of gravity, the idea is often dismissed or even ridiculed by conservative scientists.

What’s certain is that the behavior of electricity between the warm gases and giant magnetic fields of the stars is an area that currently lacks the necessary study to either validate or refute this curious theory. To study such fields could indicate a new understanding of these phenomena, such as the energy of gamma rays, the acceleration of the expansion of the cosmos, and the tremendous discharges of energy which were said to have occurred once long ago, in the skies of remote times.

A Question of Electricity

The behavior of electricity in warm gases at cosmic magnitudes is still a discipline in its infancy. Yet this understanding applied to different electromagnetic fields may provide an idea of how a spatial discharge could take on a quasi-human form in ancient times.

The gigantic “electric” ray of plasma would resemble a human torso represented in the figure of the “squatter,” and the discs of energy traversing the axis of the body would be spread far, like waves going in opposite directions, giving the look of arms and legs. The profile view of a third element, a central “thread” that circles the body, would appear like two points condensing toward both sides of the figure, completing the most common representation of the picture.

In this way, the repulsion among the discs together with the axis of electricity would have given place to one of the most spectacular visions that ancient humanity could have had the joy of appreciating: a great being with open arms and arched legs.

According to graphic vestiges, the figure of the squatter could be appreciated from all points of the globe. Its form appears recorded in cultures of Arizona, Armenia, New Mexico, Venezuela, Spain, Italy, the Alps, the Middle East, and China among others.

But the squatter may not be the only unique celestial spectacle presented to the ancient world. Different patterns repeated in petroglyphs across the entire planet could be taken to note nebulas or abysmal explosions.

For years, scientists have only recognized the sun, the moon, and other direct representations found in the cultural ancestry as vivid observations of the celestial vault, chalking up images of gods, humans, and animals to imaginary aggregates of the artists. But many modern archeologists, like Anthony Peratt, have started to validate these “intrusions” in ancient mythology as substantial facts of existence.

In the same way that the idea of a flat Earth was replaced by the round globe reality we know today, as geocentrism was displaced for heliocentrism and as the theory of relativity ousted years of Newtonian ideology, the Electric Universe threatens to produce a total upheaval of all modern theories of the cosmos.

Frequently discredited, the pioneers of this new science may not be far from running into the same luck as Galileo, Newton, and Einstein, who were only granted their due after years of neglect and derision.