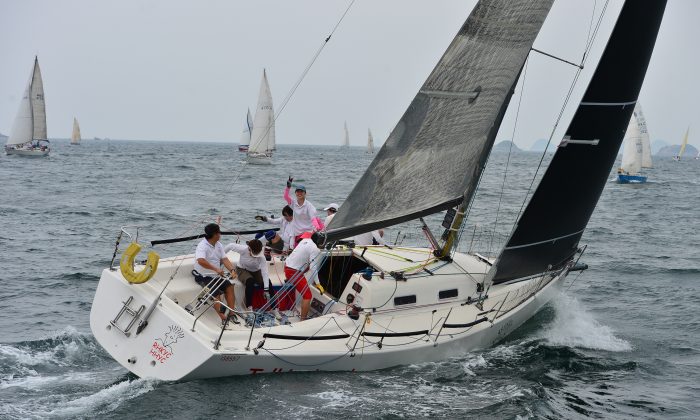 The crew of ‘Talkinghead’ were pleased with their performance finishing in first place in Race-2 of the IRC Division in the Helly Hansen Summer Saturday Series at Hebe Haven on Saturday June 14, 2014. (Bill Cox/Epoch Times)
Hong Kong

A peaceful afternoon, with 39 boats leisurely enjoying summer sunshine racing, turned into a frantic ‘all hands to the helm’ in Race-2 of the Helly Hansen Summer Saturday Series on Saturday June 14.

Title sponsor, Helly Hansen, the Norwegian outdoor clothing and footwear specialists is well known for providing attire for adventurous conditions, so an abrupt change in weather was no problem.

The afternoon’s racing started in a gentle 7-knot breeze which continued throughout the 2-circuit windward, leeward sausage course designed with two A-Marker buoys—the longer one for IRC and Sports Boats, and the shorter one for HKPN and Dragon classes. All three starts got off on time with IRC and Sports Boats off first at 2.30pm followed by HKPN (2.35pm) and Dragons (2.40pm).

At the start of Race-2 over a similar course the wind had increased to a more lively 11-Knots… but that was just the start. As the race progressed the wind picked up further and at one stage was blowing at 20-30 knots propelling boats downwind at an impressive speed. Many boats had difficulty keeping their sails in trim and some boats were seen heading in rather unusual directions. Although there were a number of daring navigational feats all boats survived the experience.

In the IRC Division Signal 8 again took line honours, but she was pushed into 3rd place on corrected time as Talkinghead took 1st place and Lighthorse was 2nd. Merlin got revenge on FreeFire in the Sports Boat category with Black Magic taking third spot.

Bits & Pieces completed her Line Honours double in the HKPN Division, but was way down in 8th place on corrected time. Tuco, Windseeker and Ichiban took 1st, 2nd and 3rd positions.

For Dragon Boats—Maiden Hong Kong, Eaux Vives and Zephyr took the first three places in Race-1 while Zephyr, Nattigheid and Maiden Hong Kong were the top three in Race-2.

Next Races
The Hebe Haven, Helly Hansen Summer Saturday Series will include nine races over 5-Days of racing through to Aug 9. The next race in the series will be held on June 28.

Day-2 of the Quest Yachting Typhoon Series will be held this coming Sunday June 22.