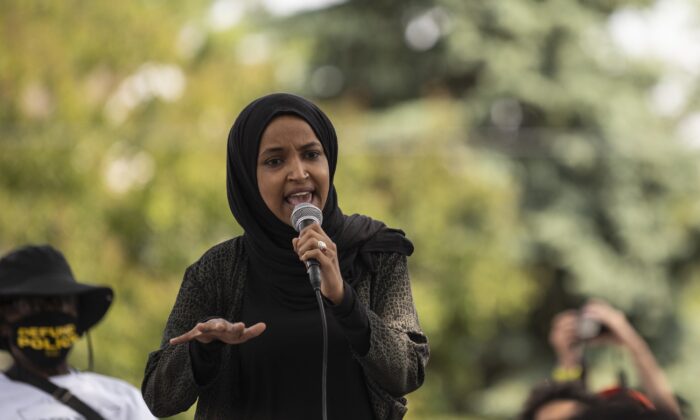 Omar, 39, is a high-profile member of Capitol Hill’s new generation of progressive Democrats. She is the first Somali-American elected to Congress.

Omar has supported the “defund the police” movement. She backed a proposal to replace the Minneapolis Police Department with a new Department of Public Safety.

Rep. Rashida Tlaib (D-Mich.) and Rep. Cori Bush (D-Mo.)—the other members of the progressive “squad” in Congress—advanced in their Democratic primaries last week.

Samuels repeatedly said that he is a moderate and that Omar’s progressive platform makes her divisive and ineffective.

Samuels made Minnesota’s escalating crime rate a hot-button issue in the primary. A Jamaican immigrant, Samuels started to organize against gun violence after a bullet penetrated his Minneapolis home around 25 years ago.

In November 2021, Minneapolis voters rejected an initiative to remove a requirement from the city charter that the city have a police department with a minimum number of officers. Omar backed the proposal, and Samuels opposed it.

“That was the straw, actually, that kind of broke the camel’s back for me, that the district wasn’t going to be well served and that she could be in there for a long time,” the 73-year-old Samuels told the Minneapolis Star-Tribune about Omar’s decision to support the proposal.

Supporters believed a comprehensive overhaul of the police department was needed to reduce police violence.

Opponents argued that the proposal lacked a concrete plan for moving forward and would have made many communities more vulnerable to crime.

“I always say when you push power, power pushes back. So it makes sense we continue to be primaried by people who are supported by right-wing donors,” Omar told Minneapolis TV station KARE 11.

Omar also told KARE 11 that she is not dismissing the crime wave across Minnesota just because she advocates for police reform.

“We all want to do the work of making our communities be safe and feel safe,” Omar said. “I grew up in Minneapolis. I’ve been here for the last 25 years. I’ve raised my children here.”

Cicely Davis, who is endorsed by the state GOP, won the Republican primary over former NBA player Royce White, and Guy Gaskin.

The 5th district has not elected a Republican since 1960.