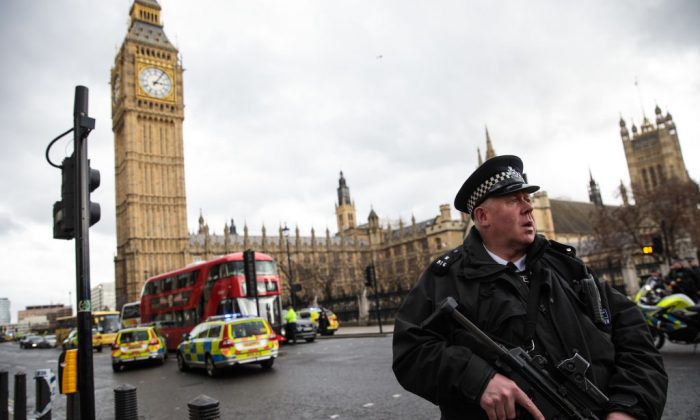 An armed police officer stands guard near Westminster Bridge and the Houses of Parliament in London on March 22, 2017, following a terrorist incident. (Jack Taylor/Getty Images)
UK

The head of Britain’s Security Service has warned that the nation is facing a “dramatic upshift” in Islamic terrorism, and that further attacks are inevitable.

In a rare speech on Oct. 18, the head of MI5, Andrew Parker, told journalists that the “intense” threat was the worst he had known in his 34-year career.

Parker warned that driving the ISIS terrorist group out of Syria and Iraq wouldn’t reduce the current Islamic terror threat to the UK.

“That threat is multidimensional, evolving rapidly, and operating at a scale and pace we’ve not seen before,” he said.

Thirty-six people have been killed in Islamic terrorist attacks in the UK this year, including a suicide bomb at a concert in Manchester, northwest England, that killed 22 people on May 22.

Parker said that 20 plots have been thwarted in the last four years, including seven in the last seven months.

Security experts have said in the past that such MI5 data probably refers to large-scale incidents with multiple fatalities, such as the 2015 Bataclan attack in Paris.

The speech, recorded by various news outlets including the BBC, came on the day that ISIS, also known as Daesh, was ousted from a key stronghold in Syria, underlining the difficulties of tackling the Islamic terrorist threat that has spread throughout western Europe and propagated in part online.

“[ISIS] is under military pressure and is rapidly losing ground in its heartland in Syria and Iraq. So much so that it’s now advising would-be fighters to choose other countries. … At the same time, the Daesh brand has taken root in some other countries where areas of low governance give it space to grow,” said Parker, according to The Guardian.

MI5 has previously said that around 850 people have traveled from the UK to Syria to join ISIS. Parker said that 130 are known to have been killed in the conflict there and that he expected many would be now too afraid to return to the UK, where they face arrest and possible conviction.

Three thousand people are being monitored by security services, with 20,000 on a watch list. There are 500 active investigations.

British security services faced criticism earlier this year when it emerged that terror attacks had been carried out by individuals previously known to security services, including one who had publicly paraded an ISIS flag.

“Attacks will occur sometimes because this is a free society, a liberal democracy, and we do not monitor everybody all the time, and I wouldn’t wish to live in a country that was like that,” he said according to The Telegraph.

“The threat is more diverse than I’ve ever known,” he said. “Plots developed here in the UK, but plots directed from overseas as well. Plots online. Complex scheming and also crude stabbings; lengthy planning but also spontaneous attacks. Extremists of all ages, gender and backgrounds, united only by the toxic ideology of violent victory that drives them.

“Attacks can sometimes accelerate from inception through planning to action in just a handful of days. This pace, together with the way extremists can exploit safe spaces online, can make threats harder to detect and give us a smaller window to intervene.”

ISIS is known for its slick use of social media and online technology to snare new recruits, spread its messages, and provide instructions for terrorist attacks.

Parker says technology itself is not the enemy, but tech companies must rise to the challenge and responsibilities lying at the “dark edges” of their products.

“No company wants to provide terrorists with explosive precursors. Social media platforms don’t want to host bomb-making videos. And communications providers do not want to provide the means for terrorists’ planning beyond the sight of MI5,” he said.