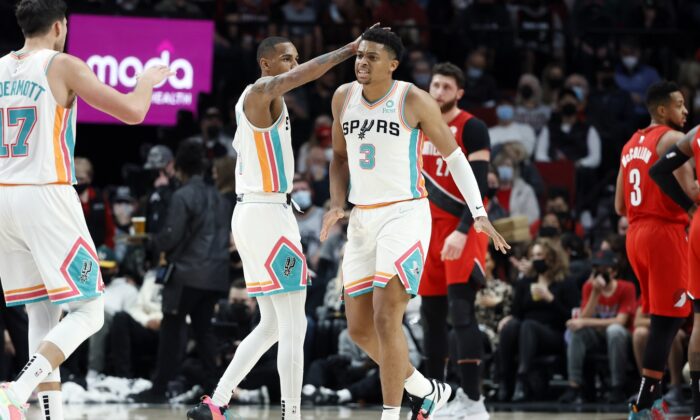 Bryn Forbes led all scorers with 18 points as the visiting San Antonio Spurs took charge early and cruised to a 114–83 win over the Portland Trail Blazers on Thursday to capture their season-high third straight victory.

The Spurs never trailed, amassing a double-digit lead in the first quarter that they built to as much as 27 early in the third period.

Portland clawed back within 12 points in the fourth quarter, but it was far too little, too late for the short-handed Trail Blazers, who played without Damian Lillard (abdomen) and Nassir Little (ankle).

CJ McCollum and Norman Powell scored 16 points each to lead the Trail Blazers. Ben McLemore put up 11, and Robert Covington and Jusuf Nurkic hit for 10 points each for Portland.

San Antonio swamped the Trail Blazers early on, building as much as a 14-point lead late in the first quarter before settling for a 32–22 edge after 12 minutes of play.

The Spurs continued their domination in the second period, stoking their advantage to 61–37 on White’s 3-pointer with 3:47 to play in the half. The gap grew to 24 points again on Poeltl’s layup 23 seconds later and a third time on Johnson’s basket from beyond the arc with 51.8 seconds remaining before halftime.

San Antonio led 68–47 at the break after shooting 53.8 percent from the floor in the half and hitting 11 of its 23 3-point attempts. McDermott led all scorers with 14 points, while Johnson added 11 points and Murray racked up 11 points and 10 assists in the half.

Powell had 12 first-half points and Covington added 10 for the Trail Blazers, who shot just 36.4 percent on its field-goal tries before halftime.

For the game, San Antonio outshot Portland 48.4 percent to 35.4 percent from the field.