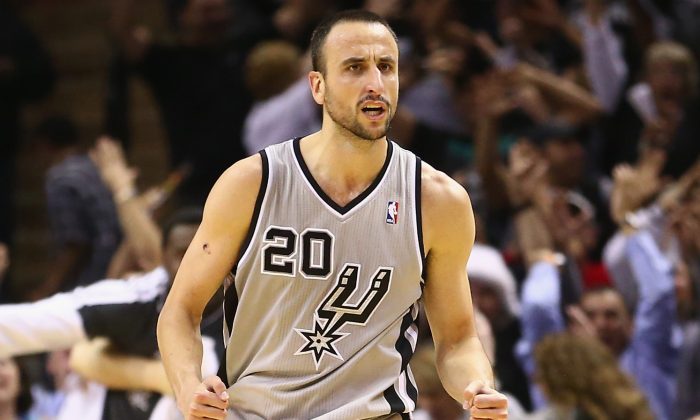 Manu Ginobili #20 of the San Antonio Spurs celebrates after scoring the game winning shot against the Golden State Warriors in double overtime during Game One of the Western Conference Semifinals of the 2013 NBA Playoffs at AT&T Center on May 6, 2013 in San Antonio, Texas. (Ronald Martinez/Getty Images)
NBA

SAN ANTONIO (AP) — Manu Ginobili’s 3-pointer from the wing with 1.2 seconds left in double overtime lifted the San Antonio Spurs to a thrilling 129-127 victory over the Golden State Warriors and Stephen Curry’s 44 points in Game 1 of their Western Conference semifinals Monday night.

The Spurs trailed by 16 points with 4 minutes left in regulation before going on an 18-2 run to close the fourth quarter and force overtime.

They trailed 127-126 with 3.9 seconds left in the second overtime before Ginobili hit his 3-pointer off a cross-court inbounds pass from Kawhi Leonard.

Golden State had one final chance but Jarrett Jack’s 3-pointer from the top of the key was off.

Tim Duncan finished with 19 points and 11 rebounds in 35 minutes. Duncan, who is battling a stomach bug, left the game with 3 minutes left in regulation and only played the final seconds of each overtime.

Klay Thompson and Harrison Barnes each added 19 points, Jarrett Jack had 15 and Andrew Bogut had 10 points and 15 rebounds.

Golden State trailed by five with 1 minute left in overtime before the Warriors scored six straight points to take a one-point lead on Kent Bazemore’s reverse layup that gave the Warriors a 127-126 advantage with 3.9 seconds left.

The Warriors missed eight of their final nine shots in regulation, including a desperation heave by Curry at the buzzer against several defenders.