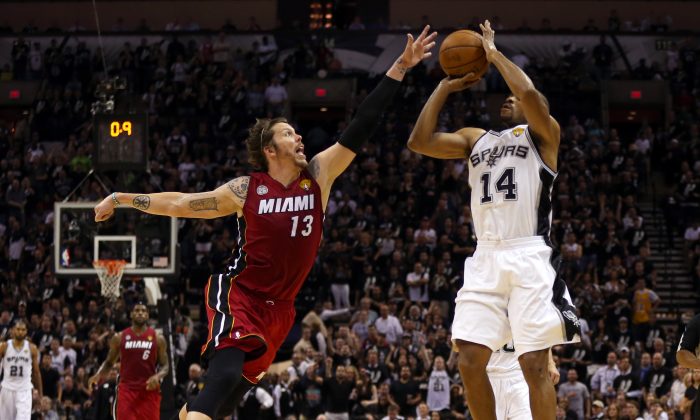 Gary Neal #14 of the San Antonio Spurs makes a three pointer over Mike Miller #13 of the Miami Heat to end the second quarter during Game Three of the 2013 NBA Finals at the AT&T Center on June 11, 2013 in San Antonio, Texas. (Mike Ehrmann/Getty Images)
NBA

The San Antonio Spurs hit a finals record 16 three-pointers to blow out the Miami Heat 113-77 in Game 3 of the NBA Finals Tuesday night, taking a 2-1 series lead in the best-of-seven set.

Spurs’ guards Danny Green (seven of nine) and Gary Neal (six of ten) were the main forces of San Antonio’s long-range barrage. Green, who hit all five threes he attempted in Game 2, hit four threes in the final quarter alone. He finished with a team-high 27 points while Neal scored 24.

The duo was so hot that Spurs guard Tony Parker—the team’s leading-scorer during the regular season—had just six points to contribute to the blowout. He did have eight assists.

For Miami, Dwayne Wade led the team with 16 points—but he scored only four after halftime, continuing his trend of fast starts and slow endings in this series. Mike Miller was the lone bright spot for the Heat, coming off the bench to hit all five of his three-point attempts—after hitting all three of his threes in Game 2.

Chris Bosh added 12 points and 10 rebounds; San Antonio, though, enjoyed a 52-36 rebounding advantage on the night. The Spurs also hit 48.9 percent of their shots overall, while the Heat were at 40.8 percent.

Tim Duncan put up his second double-double of the series, scoring 12 points and grabbing 14 rebounds, while Kawhi Leonard scored 14 points, including a pair of threes, and grabbed 12 rebounds.

The game was somewhat close through most of the first half and was actually tied at 44 with 37 seconds left before halftime when Tony Parker and Gary Neal ended the half with back-to-back threes to go up six at the break. They continued the run into the third quarter going up by as much as 21 points (75-54) with 1:50 left.

LeBron James, who had a forgettable performance hitting just 7 of 21 shots for 15 points, then stepped into action with nine straight Heat points to cut the lead to 78-63 at the end of three quarters and gave Miami a sliver of hope for a comeback.

It would soon be dashed though.

The Spurs started the fourth with a 13-0 run, highlighted by a pair of Gary Neal threes to extend the lead to 91-63 to unofficially end the game with 9:38 left. Heat coach Erik Spoelstra finally pulled his starters a few minutes later with his team down 102-71. All that was left then was for the crowd to cheer the entrance of one-time star Tracy McGrady, who ended up missing both of his garbage-time shots.

Game 4 will be Thursday night in San Antonio.