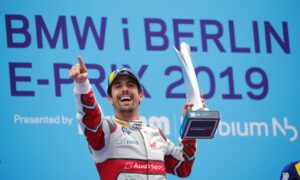 Greg Hodnett spent his entire adult life racing sprint cars, and on Sept. 20, it was sprint car racing which killed him.

The 49-year-old professional driver from Pennsylvania, lost control of his car while running alone, in fifth place, in the final laps of a race at BAPS Motor Speedway in York Haven, Pennsylvania.

Competitors think something on his car broke, sending the highly skilled driver out of control. The car flipped; Hodnett was killed instantly.

Sprint car aficionado and car owner Les Stewart told the York Daily News that he had known Hodnett for at least a couple decades.  Stewart was in the stands when the crash happened.

“You knew something was wrong when he didn’t get out of the car right away.” Stewart said. “You knew he was hurt. You didn’t know he was gone.”

Thoughts and prayers go out to Greg Hodnett, his family and friends. I’ve always felt Greg was one of the best to ever strap into a sprint car and accomplish the things he has across the country. Feel honored to have had some great battles with him over the last few years! RIP

Sprint cars are very light, very powerful and very simple—just a fuel tank, a motor, and a roll cage. They crash often and they often crash hard. Usually, the cars just bounce around, are turned upright, and keep racing. But it is never safe to drive a 1,400-pound car with 900 horsepower at top speed in a pack of other drivers trying to get ahead. And if things go wrong, they can go terminally wrong.

growing up listening to stories of dad and hodnett battling at riverside speedway and then getting to know him and race with him, its a very sad night for the racing community. thoughts and prayers to his family, friends and fans!!

Extremely proud of ⁦@HeffnerRacing⁩ team Ryan Hand, Aaron Bieler, Ben Engle for there efforts in a very special victory, first in 28 years of trying, in our preliminary night of the ⁦@KnoxvilleNats⁩ and earning a spot in the A-main, wish Mike, Doug, n Sean were here pic.twitter.com/44XFn0v9EL

Greg Hodnett was something of an anomaly in the ranks for sprint car drivers, in that he managed to make enough money racing that it was his full-time job.

That was partly because Hodnett worked so very hard to succeed. He told the York Daily Record in a 2016 interview, “We probably put in minimally 60-70 hours a week in and probably on average 80 to 100. So there’s not a lot of time for anything else unfortunately.

“I do try to spend time with my family. If we have a day that we know we’re not going to race and I can get away, and not have other commitments going on, then I can take my wife to the beach for a day or something like that. But then we have to come right back because I have to get back to work.”

New look by RRI Motorsports graphics @HeffnerRacing @XXXRaceCo at pri. Should be able to find it on the track. Nice job Chad pic.twitter.com/PsVZMFo6Cl

All that work paid off. Hodnett won the World of Outlaws sprint car league Rookie of the Year award in 1993, and in the intervening years won 20 races in that series, considered to be the premier sprint car series in the world, and 19 more on the national All-Star Circuit of Champions series.

Hodnett won the 2009 the coveted National Open at Williams Grove Speedway, and in 2018, the first night feature race at the Knoxville Nationals at Knoxville Raceway, which bills itself quite honestly as Sprint Car Capital of the World.

Dirt Classic 5 at Lincoln Speedway Moved to Saturday, October 6In light of the tragic loss of sprint car legend Greg…

The Knoxville Nationals are something like the sprint car Olympics. Hodnett won there in 1994, won the Hard Charger award in 2016 for passing the most cars during his race, and showed he was still in top form with his win on Aug. 5.

Hodnett beat NASCAR star Kyle Larson in that race. It was one of the biggest wins of his career. It was also his last.

Seeing you two battle the last 2 years during PA speedweeks made for some of the greatest racing memeries of my life. Sorry for the loss to your racing family, and praying these tragedies come to an end. #RIP pic.twitter.com/7AFLkLIyYY

A Gentleman and a Tough Competitor

According to Driver Database, Hodnett had 129 wins to his credit, including seven state championships. He finished second twice and third twice in Pennsylvania Sprint Car Points series.

More important than his list of victories was his attitude.

Hodnett was highly respected in the paddock for being a gentleman.

“He was a guy I looked up to a lot,” said Kyle Moody, 28, an up-and-coming driver whom Hodnett took time to informally mentor.

“He was nothing but class. He was always on his game. He was definitely a smart racer,” Moody told the York Daily Record. “He was a tough guy to beat.”

Hodnett was always generous and helpful—willing to help the drivers who would try to beat him later that night. “You could go up to him and ask him anything,” Moody said.

“There are not many guys in that age group that the younger drivers can go to for advice,” Moody added, saying that Hodnett inspired him to believe he too, could race full time.

“He made guys like me believe that we can do it,” he said.

Clair Wintermyer owns Wintermyer Auto Salvage, not far from the BAPS Motor Speedway. He is a longtime racing fan and knew Hodnett well.

“He was a real easy-going guy,” Wintermyer said. “He was friendly with everyone.”

Blessed to have a few of my grandchildren, daughter, n son in law in victory lane last night. family+racing=awesome pic.twitter.com/WcC2tK22Gd

Racing is a competitive sport, and oftentimes adrenaline overrides reason. Drivers push too hard on the track, and if they wreck, sometimes continue the contest in the pits, with shouting, shoving matches, and even fistfights breaking out occasionally. Hodnett never got involved in any of that, Wintermyer noted.

“I never saw him get upset after a crash,” Wintermyer told the Daily Record. “All the years I saw him race, I’ve never even seen him raise his voice. Not once.”

Happy 30th birthday to my awesome daughter. We are so proud of you and the woman you have become. Love you, have a wonderful day. pic.twitter.com/MiP9VubmDb

Greg Hodnett really didn’t have any choice in how he would live his life. His grandfather was a racer, as was his father. Hodnett knew what his career was going to be before e entered high school.

“We didn’t really go hunting, we didn’t go fishing,” Hodnett told the Daily Record. “We went racing and that’s just the way our lives were centered around. That’s kind of what we did all our lives.”

Greg Hodnett’s last tweet, was a birthday remembrance of his father, who had died.

Wishing my father in heaven a Happy Birthday. Sure do miss him.

Hodnett got into the sport actively when he was 13 or 14, he said. “A buddy of mine wanted to race and I started helping those guys on the car just working on it. The opportunity came at about 16 to drive it and we were really fortunate to have some pretty quick success, and I’ve been driving ever since.”

Hodnett broke into the big time in 1993, when he won the World of Outlaws Rookie of the Year award. A year later he had a huge series of races at the Knoxville Nationals, an event he called “the one that means the most to me.”

“The Knoxville Nationals is our Indy 500. It’s our Daytona 500, so that’s the big race,” he explained. “We started mid-pack of the C main and ran the alphabet to run in the top five of the A main, and passed a ton of cars to do it.”

“That was one of the times I felt like, ‘Maybe I can do this and be competitive, and really make a living out of it’,” he said.

Thinking of my father who passed away 5 yrs ago today, sure do miss him pic.twitter.com/bdAowck7Dl

He understood that racing was dangerous—but to him, it was more exhilarating than risky.

“I think it’s a very hard thing to tame a sprint car. It’s a lot of horse power. There’s very little weight. You’re trying to control the uncontrollable and it’s quite a challenge at times to do it.” Was how he described it for the Daily Record in 2016.

“The speeds are pretty phenomenal, I mean the acceleration rates parallel say a Formula One motorcycle or even a Formula One race car. So we have pretty much a beast under us and trying to tame it, and be around 24 other guys. It’s an exhilarating experience and it’s very rewarding when you do well,e said.” h

For 33 years, Greg Hodnett tamed the beast, and earned the exhilaration. He not only drove the cars, he drove them well—better than most.

On one unlucky evening, his car, not his skill, let him down.

Still, it is his demeanor, as much as his talent, which his many friends and fans will remember. And that legacy, more than his list of victories, is something worthy to leave behind.