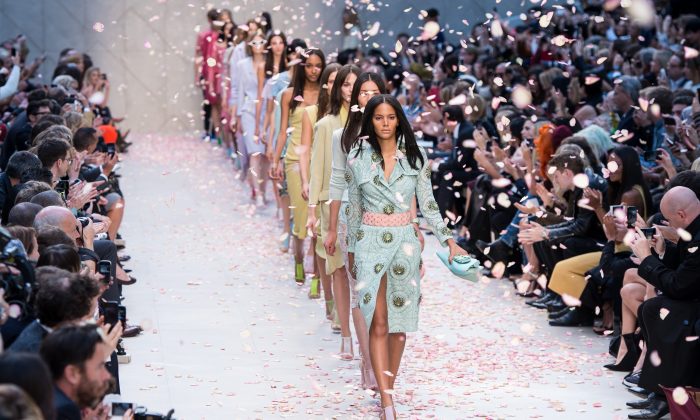 Let the spring begin! The runway at the Burberry Prorsum show at London Fashion Week SS14 at Kensington Gardens on September 16, 2013 in London, England. (Photo by Ian Gavan/Getty Images)
Fashion

Spring 2014 Fashion Trends: The Looks to Look Forward To

One of the most commonly seen trends on the spring catwalks are collars of all kinds. Whether on shirts, coats, or dresses, pointed collars have been everywhere. Let’s list just a few labels that have used them: Alexander Wang, Burberry, Carven, Celine, Chanel, Chloe, Erdem, Kenzo, and Ralph Lauren.

This style has at least one great advantages: it can make you look neat and elegant without effort, especially on those days you don’t have time to put into your hair or makeup.

It is sort of like the spring version of striped T-shirts in summer.

Shoulders will be emphasized in 2014, with designs covering the chest up to the neck, but leaving the shoulders bare, accentuating this feminine feature. This style was popular in the ‘00s. Some designs also leave one shoulder bare by cutting one sleeve off a long-sleeved shirt.

This style is featured by Christopher Kane, Etro, Celine, Dior, and DKNY, among others.

Belt It Up to Show Your Waist

Belt it up this spring. Highlighting the waist is another hot trend for next season; with belts on coats, shirts, and high-waisted skirts, designers have emphasized the feminine figure. For  inspiration on how to wear this style, take a look at the spring collections by Derek Lam, Etro, Armani, and D&G.

Yes, it’s florals again! What better time to drape yourself into florals and blend in with the nature around you. D&G, Alberto Ferretti, Oscar de la Renta, Miu Miu, and MSGM have all featured florals for the spring. D&G’s delicate floral prints are reminiscent of sunny Sicily and Alberto Ferretti’s designs are inspired by European folk floral prints. Some designers went in the opposite direction, however, keeping their dresses a solid color to complement the blossoming beauty of spring.

There’s a new option this spring in addition to the light spring coat and trenchcoat—the bomber jacket. Shaped into a feminine style by Carven, Armani, and Balmain, the bomber jacket was the new “it” spring fashion featured on these designer’s catwalks.

Although holiday sparkles are gone, you can bring the golden shimmer into the spring. From nail polish to hair accessories, designers are keeping the gold in vogue. As usual, D&G offers beautiful inspiration from Sicily, this time from its history. The long, belted dresses and golden hair accessories harken back to ancient Roman style. This style is also seen in the Vivienne Westwood and McQueen collections, which seem to incorporate elements of a Gladiator’s attire.

Designers are emphasizing not only the waist this season, but also the neck. We’ve spotted more than a few collections featuring short necklaces that fight tightly around the neck, including Carven, Dior, and Armani. Some of the necklaces recall those popular in the ‘00s, and may be the harbingers of a return of this trend.