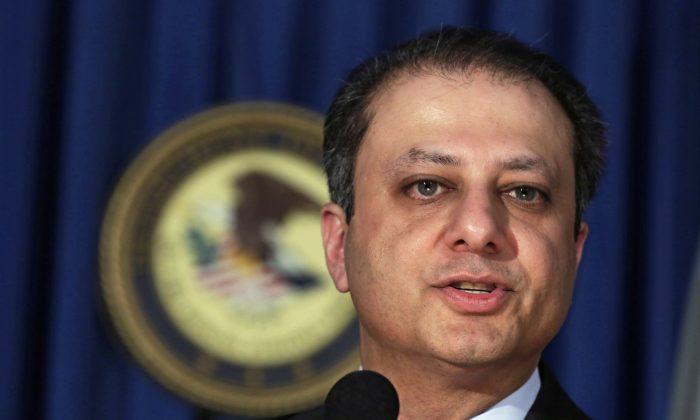 NEW YORK—After a successful attack on corruption in New York’s state government, the hard-charging federal prosecutor in Manhattan appears to have set his sights on New York City.

Already an embarrassment to the nation’s largest police department, it remains unclear whether the widening probes could do damage to City Hall.

So far, nine police officials, including four deputy chiefs, have been transferred or stripped of their guns and badges as internal affairs detectives and FBI agents examine whether officers accepted gifts and trips from businessmen in exchange for police escorts, special parking privileges, and other favors.

Pooja Mor on Modeling Life, New York, and What Keeps Her Grounded

And in recent weeks, the evolving probe has turned to campaign financing practices that have long been scrutinized by good government groups.

An animal welfare group that has been lobbying Mayor Bill de Blasio to ban carriage horses from city streets confirmed Friday that it had received a subpoena from federal prosecutors seeking documents related to its fundraising efforts for a nonprofit group created to advance the mayor’s policy agenda.

Other subpoenas have sought records related to hundreds of thousands of dollars in donations solicited by the mayor’s campaign that were rerouted to upstate Democrats running for the state Senate, The New York Times has reported.

Separately, federal agents operated a wiretap that captured the conversations of two businessmen, Jona Rechnitz and Jeremy Reichberg, who were friends with two top police officials and served on de Blasio’s inaugural committee in 2013 and contributed to his campaign, two law enforcement officials said.

Investigators want to know whether they have been offered any official favors in exchange for donations, according to the officials, who spoke to The Associated Press on condition of anonymity because they weren’t authorized to discuss an ongoing case.

De Blasio, a Democrat, has not been accused of any specific wrongdoing and his campaign organization has said it operated within the laws. But the developments have created the perception that a city that was thought to have rid itself of everyday corruption might be slipping back into the bad old days.

“If you can find a corrupt mayor of New York City, holy moly, that’s a big prize,” said Jennifer Rodgers, a former federal prosecutor who now heads the Center for the Advancement of Public Integrity at Columbia Law School.

Several parts of the multifaceted probe had their origins in an FBI investigation of suspicious financial transactions involving a Harlem liquor store.

Campaign financing wasn’t on FBI agents’s minds in 2013 when they were alerted to a series of large transfers and deposits in multiple bank accounts held by a small wholesale liquor business in Harlem, the law enforcement officials said.

Ultimately, investigators concluded that a Harlem restaurant owner was using the accounts to run a $12 million Ponzi scheme, in which Rechnitz and Reichberg were investors.

The investigators continued to scrutinize the finances of the businessmen, who have donated tens of thousands of dollars to the mayor’s campaign and advocacy efforts. Authorities also learned that the pair had cultivated a relationship with Norman Seabrook, the powerful head of the 9,000-member jail guard union, and Phillip Banks III, formerly the top-ranking uniformed officer at the police department. The men all visited Israel together in 2014.

A federal subpoena issued to the union last year and reviewed by the AP has sought records detailing the flow of funds from Seabrook’s union into a company controlled by Rechnitz, JSR Capital, and into other businesses.

A lawyer for Banks declined to comment. Seabrook and a lawyer for Rechnitz didn’t return messages. Calls to numbers listed for Reichberg rang unanswered.

Wiretaps in that probe led to a broader examination of the cozy relationship between high-ranking police and the city’s Orthodox Jewish community, the officials said.

In a related case, a member of a neighborhood patrol in an Orthodox Jewish community in Brooklyn was caught in a wiretapped conversation bragging that he had used connections in the NYPD to get over 150 gun licenses for people without required background checks, according to court papers charging him last week with bribery and conspiracy.

Bharara, the federal prosecutor, has been mum on the details of the investigations, but vowed in a recent speech to continue his efforts, in both state and city government.

“Executive offices in government,” he said, “are far from immune from a creeping show-me-the-money culture that has been pervading New York for some time now.”