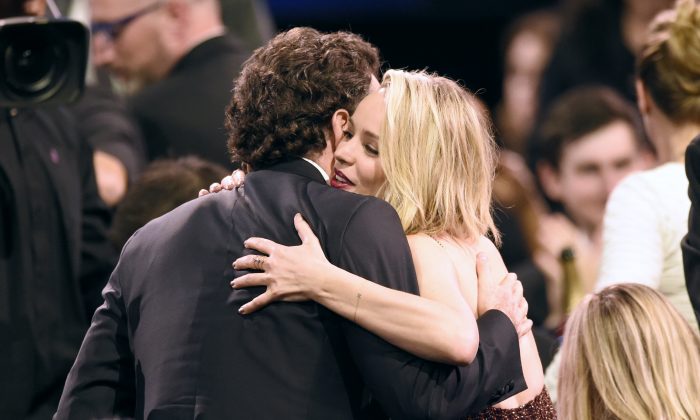 Brian d'Arcy James, left, hugs Rachel McAdams in the audience after hearing that they won the award for best picture for "Spotlight" at the 21st annual Critics' Choice Awards at the Barker Hangar on Sunday, Jan. 17, 2016, in Santa Monica, Calif. (Photo by Chris Pizzello/Invision/AP)
Entertainment

Both actors won Golden Globe Awards and are considered front-runners for the Academy Awards, too.

“Mad Max: Fury Road” was the most nominated film of the evening with 13 nominations from the Broadcast Film Critics’ Association. While it lost out for the top prize, it did win a number of awards, including Best Director for George Miller, best action movie, and best action movie actor and actress for Tom Hardy and Charlize Theron.

The financial crisis dramedy “The Big Short,” meanwhile, won for best comedy and best comedic actor for star Christian Bale, who kissed both his wife and director Adam McKay on his way up to the stage to accept his award.

Both were up for best picture Oscar heavyweights like “Spotlight,” ”The Revenant” and “The Martian,” as well as “Star Wars: The Force Awakens,” which was added after initial nominees were announced and went home empty handed on Sunday.

But it was “Spotlight’s” night in the end. The film also picked up Best Acting Ensemble, winning out over films like “Straight Outta Compton” and “The Hateful Eight.”

It was the only award that N.W.A biopic “Straight Outta Compton” was up for at the show, but the film was on everyone’s minds on the blue carpet and in the early moments of the evening after it received only one Academy Award nomination for screenwriting just days earlier.

“They got snubbed, but there are lots of other great films that got snubbed as well,” said Neil Brown Jr. before the show began. Brown Jr. played DJ Yella in the film which has picked up its share Guild nominations this season.

“Just everybody talking about it is enough of an Oscar for us,” he added.

The lack of diversity this awards season came into focus on Thursday when there were once again no actors of color among the Academy Awards nominees. On Saturday, Jada Pinkett Smith even posited on Twitter that perhaps people of color should refrain from participating in the Oscars altogether.

“We are rarely recognized for our artistic accomplishments,” Smith wrote.

“Black-ish” star Anthony Anderson joked early on about the lack of diversity at the Oscars.

“A lot of actors who win the Critics’ Choice go on to win the Academy Award,” said Anderson when presenting an early award with co-star Tracee Ellis Ross. “For you, Tracy, that means only half of you gets to go to the awards.”

While Anderson was joking about Ross’s mixed race background, the Critics’ Choice Awards winners do often reflect who will go on to win the Oscar, making the ceremony an interesting barometer for the season as everyone gears up for the Guild Awards and, eventually, the Oscars on Feb. 28.

Sylvester Stallone followed his Golden Globes coup by winning best supporting actor for his reprising his role as Rocky Balboa in “Creed.”

“Before I get into any more trouble I want to say thank you to my director Ryan Coogler. He is a genius. He really made it all happen,” Stallone said. He also called co-star Michael B. Jordan a “great talent.”

At the Golden Globe Awards, Stallone forgot to thank his co-star and director during the televised portion of the evening and was harshly criticized for the oversight. He has since apologized for the mistake.

The Critics’ Choice Awards do get stars to turn out in droves, like Matt Damon, who did not end up winning anything. This year some of the big winners of the evening failed to come out, though, like Brie Larson, who is shooting “Kong: Skull Island” in Hawaii, and Leonardo DiCaprio, who is promoting “The Revenant” in Europe.

DiCaprio accepted his award via a pre-taped speech.

This is the first year the Critics’ Choice Awards has combined movies and television nominees into one ceremony, similar to the Golden Globes.

Big television winners in the acting categories include Jeffrey Tambor for “Transparent,” Idris Elba for “Luther, and Rachel Bloom for “Crazy Ex-Girlfriend.”

Aziz Ansari’s “Master of None” won for best comedy series, while “Mr. Robot” picked up the best dramatic series award, as well as best actor for Rami Malek and best supporting actor for Christian Slater.

Host T.J. Miller, who stars on the HBO show “Silicon Valley” hosted the show, which straddles a delicate line of irreverence and sincerity. It’s not quite the Golden Globes, but it’s not of the Academy’s caliber just yet.

“Celebrities, don’t worry. I’m not going to Ricky Gervais this thing,” Miller said at the beginning of the show.

“Trainwreck” director Judd Apatow wasn’t afraid to let his true feelings shine through, though. When presenting the previously announced MVP award to “Trainwreck” star and writer Amy Schumer, he joked that the only way to get her there was to make up an award just for her.

“Somebody already told us we lost best comedy to ‘Carol,'” Apatow laughed.

“Trainwreck” did lose best comedy in the end — not to “Carol,” but to “The Big Short.”

Schumer, however, did win for best actress in a comedy.