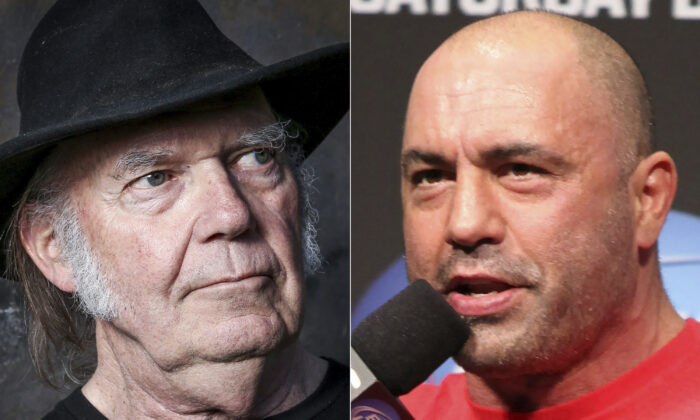 Spotify’s market cap increased by billions of dollars on Monday, following a controversial week that has seen the streaming platform at the center of a culture war between the folk-rock star Neil Young and leading podcast host Joe Rogan over allegations that the latter has used his platform to spread misinformation concerning the CCP virus.

The incident began last week, when Young issued an ultimatum to Spotify demanding they censor The Joe Rogan Experience, lest Young remove his music from the platform altogether.

“I am doing this because Spotify is spreading fake information about vaccines—potentially causing death to those who believe the disinformation being spread by them … They can have Rogan or Young. Not both,” Young said in a letter to his management team.

Though Young called on others to pull their music from the platform, the call has largely gone unheeded by other musicians, with Joni Mitchell being the most notable artist to follow Neil’s path in removing her music from the platform. Indeed, if recent stock activity is to be believed, the recent contention over CCP (Chinese Communist Party) virus information is unlikely to pose a harm for the Swedish streaming platform.

Like a great multitude of tech stocks, Spotify suffered a difficult January, which saw the streaming platform’s market cap decline by almost 20 percent over the month. In the aftermath of the Neil Young announcement, Spotify reached its lowest point in the past year, at $164.41 per share on Jan. 28. This momentary decline occasioned some measure of triumphalism among Rogan’s critics, who viewed the sell-off as the company’s just desserts for Spotify’s platforming of an accused sower of misinformation.

However, since the beginning of the Neil Young controversy, Spotify has actually outperformed the Nasdaq during a challenging week for the market in general and tech stocks in particular. This dynamic was most vividly illustrated on Jan. 31, which saw Spotify’s stock price rise by over 13 percent as Spotify remained steadfast in its commitment to maintain Rogan’s podcast (albeit with the caveat that “content advisories” would be added to episodes discussing the CCP virus).

Despite the criticism, The Joe Rogan Experience remains the most popular podcast in the world, with an estimated 11 million listeners on each episode. The show, which was acquired by Spotify in an exclusive deal of approximately $100 million in 2020, is an unlikely success in a media landscape that prioritizes brevity, sensationalism, and conformity to establishment narratives: Rogan’s episodes frequently span over three hours in length, and his ideological agnosticism makes him difficult to pin to any particular political faction.

Rogan defended his podcast in a nearly ten-minute video posted to his Instagram on Jan. 30, emphasizing his openness to multiple perspectives both inside and outside the limits of medical orthodoxy and reiterating his commitment to free speech.

While the controversy is just one of many disputes over the identification of misinformation in the pandemic, it may also be understood as a war the medium of podcasting itself, which has become increasingly politicized in the wake of the CCP virus.

Whereas the first generation of podcasts, reflecting values and aesthetic sensibilities of NPR, maintained a distinctly liberal predisposition, the medium has more recently become attractive to political and cultural dissidents, who view it as a rare enclave relatively free from institutional coercion. The time commitment of listening to long-form episodes when searching for objectionable content poses a significant barrier for would-be censors, and the conduciveness of podcast listening to multitasking with menial labor endows the medium with a wide-ranging populist appeal.

“The podcast, or independent radio show, represents a Wild West free from the fading behemoth of mainstream media, the scandalous corruption of which was the dominant theme of Donald Trump’s presidency,” podcaster and media critic Jack Mason told The Epoch Times. “The catch-all term ‘misinformation’ is a cynical attempt by liberals to give censorship a gloss of scientific authority which is only applied to conservatives, never the other way around.”

Mason, who recently left his job in the hospitality industry to focus full-time on his podcast The Perfume Nationalist, believes that the market response to Young’s ultimatum demonstrates the wide appeal and popularity of Rogan’s approach to information.

“Joe Rogan is a likable, inoffensive centrist who is currently subject to unhinged attacks from left-wing media because he opposes censorship and encourages listeners to think for themselves, once universal American values now disingenuously classed as ‘far-right sedition.’ Spotify’s stock increase following their refusal to deplatform Rogan demonstrates people’s desire for free expression and dissident voices in today’s cloistered, pro-censorship nanny state climate.”

For many podcasters, Mason and Rogan among them, the medium is one where creativity and free speech thrive in an otherwise stifling information landscape. The continued success of The Joe Rogan Experience, despite the protestations of critics, is a testament to this appeal. The stock market has thus far rewarded Spotify for their loyalty to Rogan. The result is a victory, not only for Rogan, but for all dissidents who view podcasting as a refuge from the burdens of media censorship.