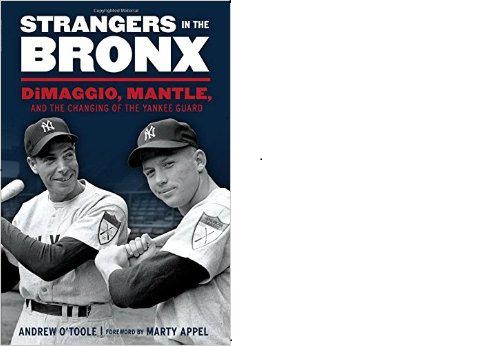 Strangers in the Bronx is about the 1951 season where superstar Joe DiMaggio was on his way and young superstar Mickey Mantle was just starting. (Photo provided by Harvey Frommer)
12- OBSOLETE

With the All Star Game on the horizon and mid-summer approaching, a triple play of top baseball reads is there for the taking and the reading. From Triumph Publishers comes STRANGERS IN THE BRONX and RED SOX NATION. From Flatiron Books comes BIG DATA BASEBALL. All belong on your sports bookshelf.

STRANGERS IN THE BRONX by Andrew O’Toole ($28.95, 277 pages) could have been even better with much tighter editing, an index and an inclusion of a Harvey Frommer Yankee book or two in the bibliography.

But seriously and despite those flaws, the book is a diamond mine of data (lots re-cycled) about that long ago time of the 1951 season, Yankees, Joe DiMaggio leaving and Mickey Mantle coming. The real strength of the book is the time machine nature of a different world of baseball and sports writing. Yankees. TOP DRAWER

Remembering Casey Stengel: You Could Look Him Up (Part II)

RED SOX NATION is the third act of the prolific and talented Peter Golenbock’s first act of the same name with added material – an oral history. Originally published in 1992 as Fenway then again in 2005 as Red Sox Nation, the third terrific tome tantalizes the reader with its depth and breadth of BoSox lore, legend and language. HIGHLY RECOMMENDED ESPECIALLY FOR SOX FANS

Big data Baseball by Travis Sawchik (Flatiron Books, $26.99, 242 pages) is more than a fascinating book about baseball and numbers. It is an inside look at how the Pirates of Pittsburgh were transformed from a small markets franchise into big time player. Sub-tiled, “Math, Miracles and the End of a 20-year Losing Streak, “The book is Moneyball plus. A KEEPER