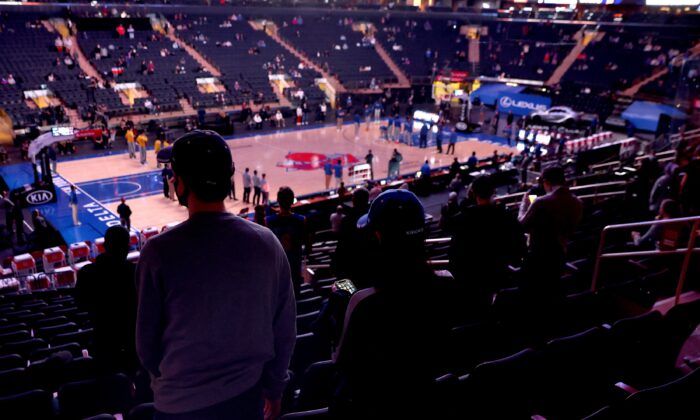 Fans are seen in the stands before a game at Madison Square Garden in New York City on Feb. 27, 2021. (Elsa/Getty Images)
US News

Some fans attending two recent games in New York City helped test a new digital health pass that can show proof a person has recently tested negative for COVID-19 or been vaccinated against the virus that causes the disease.

Fans at a Feb. 27 Brooklyn Nets game at the Barclays Center and at a March 2 New York Rangers game at Madison Square Garden helped test the Excelsior Pass, which was developed by the state and IBM.

People using the pass can print it out or use their smartphones to display a copy when they’re entering an arena.

The test results are being used to enhance the quality of the pass, officials said when recently announcing the pilot program.

“As we begin reopening the valves on different sectors of our economy, we are putting guidelines in place to ensure individuals attending events involving larger gatherings have tested negative for COVID or have been vaccinated to avoid an outbreak of the virus. The Excelsior Pass will play a critical role in getting information to venues and sites in a secure and streamlined way, allowing us to fast-track the reopening of these businesses and getting us one step closer to reaching a new normal,” Gov. Andrew Cuomo, a Democrat, said in a statement last month.

“This solution can provide New York, and other states, a simple, secure, and voluntary method for showing proof of a negative COVID-19 test result or certification of vaccination. IBM is proud to support the State of New York with its efforts to apply innovative technologies to help residents and communities respond to COVID-19,” added Steve LaFleche, general manager of IBM Public and Federal Market.

All staff members and spectators at large stadiums and arenas in New York state must test negative for COVID-19 within 72 hours of the event and produce proof of the test. The pilot saw a subset of predetermined participants able to use the pass to confirm the negative test.

People aren’t currently required to prove vaccination, but New York City mayoral candidate Andrew Yang has floated an easy way for people to show they’ve been vaccinated, “like a bar code they can download to their phone.” Similar efforts are underway around the world, like a “Digital Green Pass” being developed by the European Union Commission.

The developments have drawn pushback.

Albert Fox Cahn, executive director of the Surveillance Technology Oversight Project, said during a recent appearance on CBS that there’s already a physical card that people carry with them to prove they’ve been vaccinated against a certain disease, which makes sense, but the new technology is different.

The digital health passes “wouldn’t be used when you fly internationally but used when you go to work, when you go to school, even [when you] go to the local grocery store,” he said. “And from my perspective as a civil rights lawyer, as a technologist, this is really disturbing, both because of those privacy and equity impacts, but because of the fact that, for all of the surveillance we’re now being sold, there’s no evidence that it will actually work.”

Virtually all of the world’s airlines require proof of a negative COVID-19 test and one airline CEO said in January he believed vaccine certificates would become the “new norm.”

Dr. Michael Ryan of the United Nations’ World Health Organization told a recent press conference that “at the present time the use of certification of vaccination as a requirement for travel is not advised because quite simply vaccination is just not available enough around the world and is not available certainly on an equitable basis.”

President Joe Biden in January ordered top officials to, in coordination with any relevant international organizations, assess the feasibility of linking COVID-19 vaccination to International Certificates of Vaccination or Prophylaxis and producing electronic versions of the certificates. Right now, people who get vaccinated against the CCP (Chinese Communist Party) virus, which causes COVID-19, receive a paper card.

A group of airlines and travel and labor groups wrote to the Biden administration this week, urging it to create a digital health pass that would let travelers show proof of vaccination.