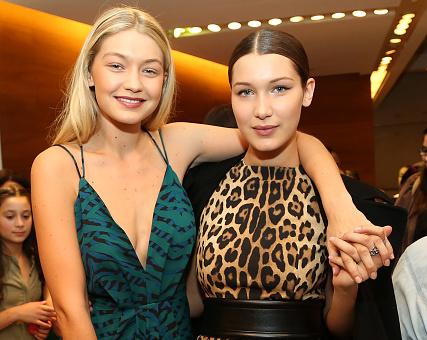 NEW YORK—The Sportmax woman has changed considerably since the label was launched in 1969. As one of the offshoots of the Max Mara group, Sportmax has a younger, more edgy feel and traditionally a minimalist slant.

The label celebrated their Fall/Winter 2014 Collection last Tuesday at the Soho store.

Hadid looked just the part, fitted with a silk jersey leopard print dress cinched at the waist with a leather belt and black cashmere coat.

The Sportmax woman–part amazon, part business woman–can now also be relaxed about her feminine assets while she faces her daily battles.

“It’s beautiful. It makes me feel great, and it’s so chic and amazing,” Hadid said about her outfit. “That’s one of the things I like about Sportmax—it’s really comfortable, and you are able to do things and still be fashionable.”

The collection features animal prints as well as multicolored mohair coats with teased out threads to create an artisanal feel yet with a modern aesthetic. Leopard print is also combined with python or fox.

The organic look of red python is held in check by geometric tailoring and counterbalanced with black or white.

Despite the clean geometry of the cuts, the collection is ultra-feminine with the emphasis on the waist.

The most dramatic look is the maxi dress with an asymmetrical peplum and deep v-neck. It comes in variations of black, white, and red, and it is developed further when the top is combined with a multicolored mesh skirt. Worn with knee-high boots and the signature wide belt, it imparts an unmistakably modern feel.

Bella Hadid was joined by her older sister, model Gigi Hadid, who wore was a Sportmax Code Black leather jacket, one of the more casual pieces of the collection.