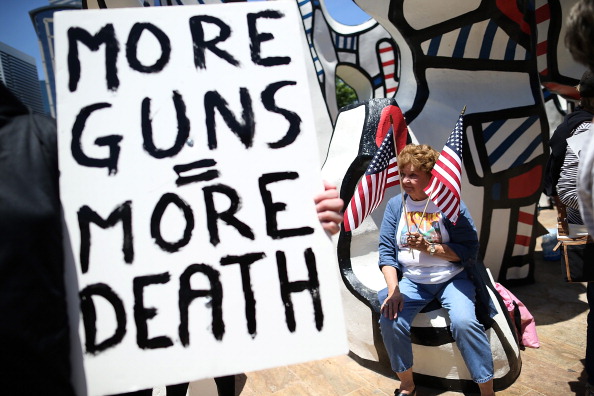 An anti-gun demonstration at an NRA meeting in this May 4 2014 file photo in Houston, Texas. (Photo by Justin Sullivan/Getty Images)
Politics

A number of states with pending legislation over gun laws on college and university campuses are considering measures backed and introduced by politicians who are active National Rifle Association (NRA) members.

Founded in 1871, the NRA has five million members in the United States, about one and a half percent of the country’s total population. The non-profit organization describes itself as a leader in education and training for firearms. It is also known for its defense of the second amendment of the U.S. Constitution, which allows for the right to keep and bear arms.

But it is also widely known as one of the most powerful lobbying entities in America.

In the several states that have legislation pending to allow guns on campuses of higher education, most of the bill sponsors are also active NRA members. The only state that requires its public institutions to allow firearms, according to the National Conference of State Legislatures, is Utah.

There are six other states that allow for concealed carry and 23 allow the decision to be made by the college or university. The current bills in states ranging from Montana to Florida would change that calculation. It’s not clear whether there is a larger concerted effort by the NRA to increase the number of institutions that allow for firearms, but politicians pushing much of the legislation clearly support the NRA’s agenda.

In Florida, Republican Sen. Greg Evers includes “NRA life member” as part of his biographical information. Evers has publicly argued that campuses that don’t allow guns are lawless zones where potential victims of sexual assault need an effective way to defend themselves.

“The problem is that in gun-free zones, that we have on college campuses right now, those gun-free zones are just an incubator for folks that won’t follow the law,” Evers said according to the Tallahassee Democrat during a recent Florida state senate hearing for his so-called “guns on campus” bill. The controversial bill, which is opposed by a number of large institutions of higher education in the state, would allow for concealed weapons on campus.

In Montana, Republican NRA member Sen. Cary Smith has argued that a bill he introduced will keep people safer.

Another self-described “life member” of the NRA, Arkansas Republican Charlie Collins, is one of the legislators behind proposals that would lower the age for those allowed to carry concealed weapons on campus. The governor of Arkansas also has ties to the NRA.

In Wyoming, where some officials want to allow concealed guns on campus, Republican Rep. Allen Jaggi helped the bill pass his side of the legislature and it is now up to the Senate to act. Jaggi, also an NRA member, was given a 100 percent political rating by the gun advocacy group.

In Nevada, lifetime NRA member Republican Assemblywoman Michele Fiore is behind a bill stirring controversy in that state that would allow concealed weapons on college campuses, public schools, some parts of the airport, and at child care facilities.