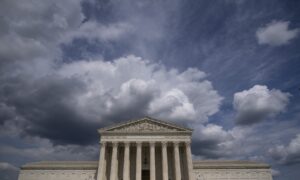 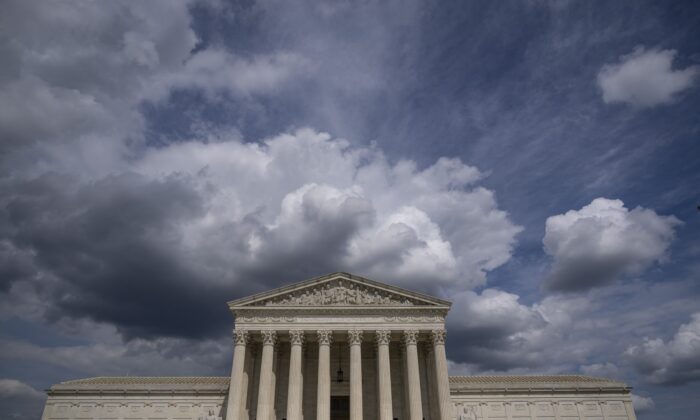 The U.S. Supreme Court building in Washington on May 17, 2021. The Supreme Court said that day that it will hear a Mississippi abortion case that challenges Roe v. Wade. (Drew Angerer/Getty Images)
Viewpoints

There’s a biblical story that tells about King Solomon being asked to adjudicate between two women both claiming to be the true mother of a child. Solomon declared that since there was no way to resolve the dispute, he would have the baby split in two, and each woman could then receive half.

While one of the two women sullenly agreed to this solution, the real mother begged that the child’s life be spared and that she be given to the other woman.

In this way, Solomon knew the identity of the real mother. She was the one who could not, given a mother’s emotional attachment to her child, bear to see her child carved in two. Solomon punished the false claimant and gave the child to its actual mother. The story, intended to illustrate the wisdom of Solomon, introduced the idea of “splitting the baby” into the English vocabulary.

I bring this up because an important abortion case is coming before the Supreme Court in October, and I think it’s likely that the court will end up, metaphorically speaking, of course, splitting the baby. In other words, I suspect the court will uphold the Mississippi law restricting abortion after 15 weeks of pregnancy while at the same time leaving the landmark 1973 case of Roe v. Wade largely intact.

I emphasize that this isn’t what I want the court to do. Rather, I prefer that the court follow the recommendation of the state of Mississippi and not merely uphold the abortion statute but also overturn Roe v. Wade and a whole series of cases that came alongside Roe or built upon Roe: Doe v. Bolton, and also Planned Parenthood v. Casey. These decisions expanded and fortified the original Roe decision. Thus, this article doesn’t lay out what I want to happen, but rather what I think is most likely to happen. Prophecy is very different from advocacy.

Why do I think the court will take a middle course and split the baby? Because the Supreme Court seems to have split into three factions. Commentators on the court typically divide the group into two, the three Democratic nominees who make up the liberal or left faction, and the six Republican nominees who make up the conservative or right faction.

But this division is too facile. The six right-leaning justices can be separated into two camps. There is a center-right faction made up of Chief Justice John Roberts, and Justices Brett Kavanaugh and Amy Coney Barrett, and a solid-right faction made up of Justices Clarence Thomas, Samuel Alito, and Neil Gorsuch. Of course, Barrett was widely considered to be a strong pro-lifer prior to and during her confirmation hearings, but I’m not convinced she’s a sure bet to overturn Roe v. Wade.

All six conservative justices know that Roe v. Wade is very bad law; it’s based on a generalized privacy right that’s nowhere stated or implied in the Constitution, and that it was based on bad history and bad science. The Roe decision pretends that we don’t know when life begins, when we actually do. Roe treats the child in the womb as a mystery, part of the body of the mother, when we can now see through ultrasound and other means that the child is its own person, with its own DNA, its own organs, and its own distinct identity. It’s connected to the mother, but it’s not part of the mother.

So Roe deserves to be consigned to the dustbin of history. It is, in fact, one of the worst Supreme Court decisions in U.S. history, on par with two 19th-century horrors, Plessy v. Ferguson, which upheld segregation, and Dred Scott v. Sandford, which protected slavery and denied blacks basic citizenship rights. Even so, conservative justices who recognize this also tend to respect established precedent, viewing the law as a force for stability, and this would provide the basis for trying to resolve the Mississippi case while keeping Roe intact.

How would a judge allow states such as Mississippi to regulate abortion in the later term while, at the same time, sustaining Roe v. Wade? It turns out that the clear language of Roe provides a way. Contrary to what most people think, Roe didn’t provide an unlimited right to abortion. On the contrary, Roe declared that it’s only during the first trimester that women have an unrestricted right to abort their child. Once the child reaches viability—the point at which it could live outside the womb—the court said that states can restrict abortion except in cases where the life or health of the mother is imperiled.

Here’s the key sentence: “If the state is interested in protecting fetal life after viability, it may go so far as to proscribe abortion during that period, except when it is necessary to preserve the life or health of the mother.” How then have states been prohibited from doing just this for the past half-century? Because courts—including the Supreme Court—have subsequently interpreted the “health of the mother” exception so widely that any woman can in theory claim that her physical or emotional health would be harmed by having the child.

One way for the court to do this would be to go back to the original language of Roe and apply it in its most clear and natural sense. Quite obviously, the court in 1973 intended states to be able to regulate abortion except when having the baby would seriously risk the mother’s life or health. The widespread misinterpretation and abuse of this provision now give the Supreme Court the opportunity to leave Roe intact while, at the same time, giving states latitude to restrict late-term abortion.

Such a decision that “splits the baby” and doesn’t fully satisfy either the pro-life or the pro-choice camp might appeal to the center-right or pragmatic wing of the court. It gives them a chance to remove the extremism of Roe while, at the same time, displaying their respect for precedent. And, of course, the liberal or left faction would go along with the center-right in order to create a majority and thus thwart the solid right justices who would undoubtedly favor overturning Roe itself.

Only time will tell if my reading of the court is right, but if it is, I won’t mind too much if you give me the nickname Nostradamus.