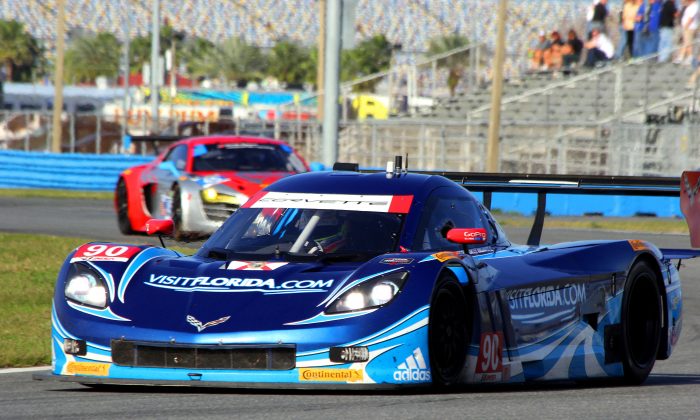 The #90 Spirit of Daytona Racing Coyote-Corvette was quickest in both of Sunday’s TUSCC Roar Before the 24 sessions. (Chris Jasurek/Epoch Times)
Motorsports

DAYTONA BEACH, Fla.—The #90 Spirit of Daytona Coyote-Corvette driven by Richard Westbrook, Michael Valiante, and Michael Rockenfeller was quickest in both Sunday sessions of the TUSCC Roar Before the Rolex 24 test session.

The SDR team topped four of the eight sessions of the three-day test, tough it only scored the second-fastest lap—top honors went to the #5 Action Express Coytote-Corvette, which lapped Daytona International Speedway’s 3.56-mile road course in 1.38.63 seconds at 129.940 mph, .268 seconds quicker and .052 mph faster than the SDR car.

Third quickest lap of the test was turned in by the #01 Ganassi Riley-Ford, which had to pull out of the test after Saturday’s sessions because its brand-new Ford Ecobost turbo V6 had dangerous exhaust header issues.

Five of the top six cars were Corvette Daytona Prototype, three of which were Coyote-Corvettes, plus a Dallara-Corvette and a Riley-Corvette—clearly Chevrolet had the best motor and Coyote the best chassis at the Roar.

Extreme Speed motorsports was quickest of the P2 cars, seventh fastest at 1.39.750 at 128.481 mph, a full second and 1.5 mph slower than the Action Express Coyote. TUSCC will have to make some adjustments to the balance between Daytona Prototypes and P2s before the Rolex 24 on Jan 25–26.

Viper Strikes in the Final Session

The two Corvettes, which had been quickest in most sessions, finished third and fifth Sunday afternoon, with the #91 Viper between them.

Porsche North America’s second car, the #911 of Nick Tandy, Richard Lietz, and Patrick Pilet, scored the best time of the Roar 1:45.564, followed by the two Corvettes. These three were the only GTLM cars to crack 1:45. The #93 Viper was fourth fastest overall, followed by the #97 Aston Martin Racing Vantage V8.

The Rolex 24 at Daytona, the first race of the Tudor United Sports Car Series, starts 3 p.m. Saturday Jan. 25 and finishes Sunday, the 26th. Tickets are available through the Daytona International Speedway website.