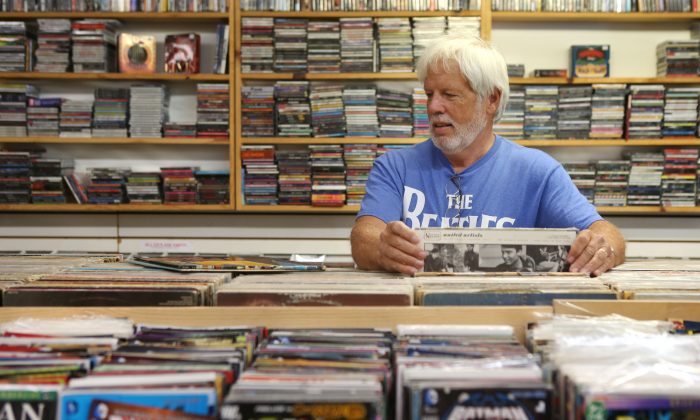 TUPELO, Miss. — Before opening Rock Star Records, a new vinyl and CD shop in Tupelo, Leslie Jones thought about opening either a video store or a snow cone business.

But after researching viable business opportunities, a sales representative told him about the recent vinyl record boom.

“I was looking to see if record sales were actually worth it,” Jones said.

After being open for three weeks, Jones has seen customers ranging from age 12 to 70 browsing his catalog of new and used records.

“You can get everything from Merle Haggard to Tupac,” he said. “Vinyl is important because of the nostalgia of it. People who had a Kiss album in 1977 and gave it away to a thrift store are coming back in here to find that album they had. It’s a revival of the youth.”

“A true music fan likes the analog sound. It’s easier on the ears,” he said. “Whatever medium comes along in the future, we’ll go along with the tide and change.”

No end in sight

For six years, Oxford went through a vinyl dry spell before David Swider opened End of All Music, revamping an old Mexican grocery store into an independent record shop with curated tastes. The store opened in 2012.

Leslie Jones makes sure his vinyl albums are in the proper bins.

“It kind of needed to happen,” Swider said. “I felt confident Oxford could support a record store. So far, it’s proving me right.”

Swider grew up a collector, always digging around garage sales for baseball cards and comic books and shuffling through his parents’ records.

For him and other vinyl enthusiasts, vinyl has made a comeback because people missed owning and collecting tangible objects. He said there has been a backlash to having music in “the cloud,” or digitally-streamed media.

But Swider is no vinyl purist. He believes digital streaming services like Spotify can be used as a tool for vinyl sales inspiration.

“I understand the convenience of it, but I’m the kind of person that if I hear something on Spotify or YouTube, and it resonates with me, I’m going to buy the record,” he said. “And I don’t think I’m alone in that.”

On the downside, vinyl production proves to be tricky with a lot of room for mistakes. Swider said a vinyl record can touch 20 hands before it hits the stores.

In the 1990s, the rise of CDs caused existing record pressing machines to close down entirely. No new record pressers have been made since the early 1980s, making vinyl production difficult and archaic, according to DigitalTrends.com.

“Vinyl is very delicate,” he said. “It can get scratched or warped. It can be packaged wrong when someone is not paying attention.”

Swider also combats major labels raising the prices on records. For records he was selling for $20, the prices have gone up to $30 or $40.

“I think it’s that age old scenario where labels are dying quickly, and they are seeing this last grasp of revenue,” he said. “They are trying to take as much advantage of it as they can.”

Back on Record – the Reasons Behind Vinyl’s Unlikely Comeback

Even with production and price raises, Swider doesn’t think vinyl will ever die out. He said there wouldn’t be another physical format to come along and be better.

He believes vinyl will be the only physical format available when CDs eventually die out.

“People are always going to want to own music in some capacity,” he said. “You’re not going to always want to pay Spotify for the rest of your life. What happens when one day when that company goes under? Where’d your music go? All of the sudden, their data history is gone, and the people who shop for records will have them at their home ready to listen.”

For 25 years, Joe Haynes, owner of Greatest Hits Music and Book Store in Tupelo, has been selling records, along with used books, comics and pop culture memorabilia.

Owner Joe Haynes of Greatest Hits Music and Books says the younger generation is missing out on sound quality and album art.

When he opened his store almost seven years ago, there were no record stores in Tupelo, and through his vinyl sales experience, he realized that people have always loved records.

Album Alley closed two years ago on Varsity Drive, but it sold primarily CDs; it could order vinyl albums if customers requested them.

Haynes said the younger generation is missing out by downloading MP3s, not only in album art, but also in sound quality.

In the MP3 format, quality can take a hit when audio is compressed, but vinyl records are in a “lossless format,” meaning no quality is lost when records are being pressed.

Haynes enjoys interacting with customers from all walks of like and different music tastes from punk to rock.

“When you run into a music buff, they are in it heart, mind and soul,” he said. “It’s their whole life. When they run into one they have been looking for forever, they are just giddy.”