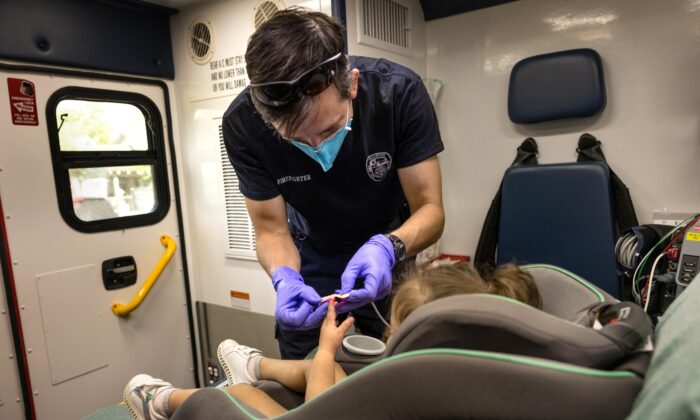 An EMS medic from the Houston Fire Department prepares to transport a Covid-19 positive girl, age 2, to a hospital, in Houston, Texas, on Aug. 25, 2021. (John Moore/Getty Images)
AMERICA

The summer increase in hospitalizations among children with COVID-19 has rapidly reversed since the start of the school year.

Children have consistently been among the least likely to fall seriously ill of COVID-19. In June, about one in 1 million children were admitted to a hospital with a confirmed infection every day, according to data from the Centers for Disease Control and Prevention (CDC). As the summer went on, however, the admission rate started to climb, reaching about five per million in early September.

The rate has since dropped again, standing at 3.5 per million for children age 1 to 17 as of Sept. 27. That’s closer to January numbers, when the rate reached 3 per million. Recent data may still be updated, the CDC notes.

The summer spike in hospitalizations was concentrated in southern states, particularly Georgia, Florida, Alabama, Tennessee, and Texas. Of the more than 20,000 child COVID-19 hospitalizations since July 1, more than half have occurred in those five states.

While the northern states have generally seen much lower rates this summer, they’re bracing for a possible increase in the winter season. If winter 2020 is any indication, it would be the north bearing the brunt of the virus in the coming months.

There have been more than 61,000 child COVID-19 hospitalizations countrywide, based on CDC data starting on Aug. 1, 2020. About 600 children have died with confirmed or probable COVID-19 infection.

The child hospitalization trend could be significant in debates over school reopenings, school closures, quarantines, mask and vaccination mandates, and other measures to mitigate the spread of the virus.

New York recently mentioned “disturbing increases in pediatric cases in areas with lower vaccination rates” in court papers, defending its mandate for the vaccination of teachers and other school staff.

Opponents of the mitigation measures argue that, even with the recent spike, the virus still poses a low risk to children and that negative consequences of the more stringent measures, such as mandatory masking or quarantines of currently healthy children, cause damage that outweighs the benefits.

Many parents were incensed over the protracted school closures plaguing some parts of the country as evidence of negative consequences poured in. Hotline calls regarding children and domestic violence went up by more than 50 percent during the initial lockdown months of 2020, and reports of predators enticing minors online nearly doubled in 2020. Remote learning has proven ineffective for many students, causing them to fall months behind in their education.

Some experts worry that protracted mask-wearing will slow development in young children, as it prevents them from reading lips and facial expressions.