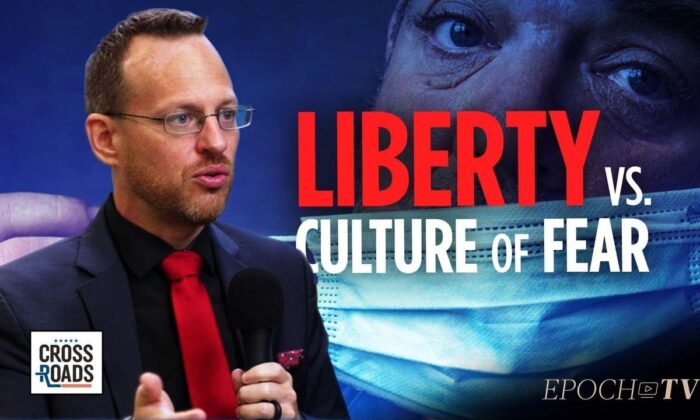 Spike Cohen: Culture of Fear During Pandemic Led to Massive Infringements of Rights

A culture of fear during the COVID-19 pandemic led to a massive infringements of the rights of the American people, according to Jeremy “Spike” Cohen, former vice presidential candidate for the Libertarian Party.

In an appearance on EpochTV’s “Crossroads” program, Cohen, who won the Libertarian Party vice presidential nomination in May 2020, argued that a culture of fear during the CCP (Chinese Communist Party) virus pandemic led to a historical violation of personal rights, referring in part to the nationwide mask mandates and lockdowns implemented as part of measures to curb the transmission of the virus.

“We just saw it last year, that largely a culture that allowed itself to be guided by its fear led to the largest infringement on our lives and our rights and our livelihoods, and the largest transfer of wealth from those with the least to those with the most in human history, or at least in American history. And as a result of that, we’re now still suffering from that,” said Cohen.

In the first two months of the pandemic, and as lockdowns were implemented to curb the transmission of COVID-19 in the United States and across the globe, the nation shed some 22.4 million jobs. While economic output has fully bounced back to its pre-pandemic levels, the labor market recovery has a long way to go.

“We’re still having arguments with people as to whether or not that was justified, even though increasing amounts of data show that it … didn’t do anything to help slow the spread of the virus. And instead, what it did was caused a measurable harm to people’s lives and livelihoods.”

And now, many critics argue that President Joe Biden’s COVID-19 vaccine mandates for federal and health care workers infringe upon the personal liberties of Americans. Nearly all Republican-led states have voiced opposition to the vaccine mandate announced by Biden last month, with many vowing to challenge the measures in court.

The president has said that 96 to 98 percent of Americans need to be vaccinated before the nation can “go back to normal.”

“But one thing is for certain: A quarter of the country can’t go unvaccinated and us not continue to have a problem,” the president told reporters at the White House on Sept. 27.

Cohen told “Crossroads” that he believes the United States does “best” when “we are most free,” saying that the nation can return to a “voluntary society… to what the founders originally intended.”

“We can live in a society that is freer and as a result more prosperous and as a result safer and fairer and more equitable, in which good actors are rewarded, bad actors are punished, and we create a better future for our children than we can ever even imagine now,” he added.