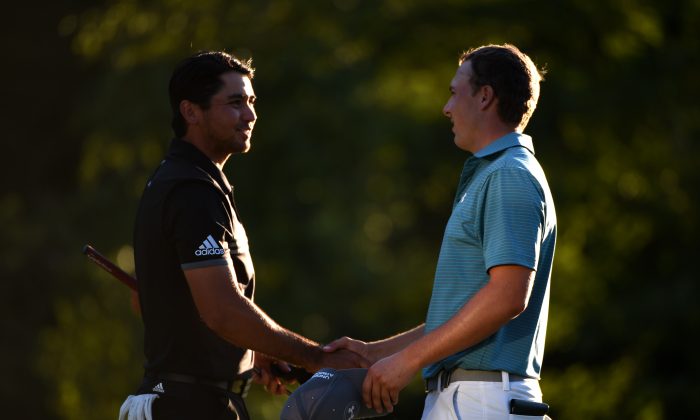 Jason Day of Australia and Jordan Spieth shake hand on the 18th green during round two of the Deutsche Bank Championship at TPC Boston. (Ross Kinnaird/Getty Images)
Golf

Spieth or Day? Tour Championship Decides It All

Atlanta, GA—When the FedEx Cup Playoffs were set to start a few weeks back at The Barclays at Plainfield CC in Edison, NJ, few, if any people, were thinking that anyone other than Jordan Spieth would be selected PGA Tour Player of the Year. The 22-year-old Texan had already won four times, with two majors in his portfolio this year. Spieth became the first man to win two majors in a year since Tiger Woods in 2002—and only the 6th in history—and the youngest U.S. Open winner since the legendary Bobby Jones in 1923. Spieth also became the youngest player to bag two majors since Gene Sarazen in 1922. Having one’s name in such illustrious company only added to the weight of the argument from his proponents.

Spieth’s bid for a 3rd consecutive major ended at The Old Course at St. Andrews during The Open Championship. He had an opportunity after an incredible long birdie putt at the 16th hole but a bogey at the always demanding Road Hole and a lack luster approach shot kept him from a solid birdie try at the home hole and missing the playoff by one stroke.

One would think that in accomplishing all of this at just 21 years of age then the likely result for PGA Tour Player-of-the Year would be a simply formality.

Plenty of golf has happened since the last putt dropped at St. Andrews with two words that jump out—Jason Day.

The 27-year-old Australian tied for fourth with Spieth at The Open and since that event has won four times—on a few occasions with performances reminiscent of when Woods as at his peak. Day claimed the PGA Championship with a -20 total at The Straits Course at Whistling Straits and then proceeded to be the main storyline as the playoffs proceeded—winning The Barclays by six strokes and last week’s BMW Championship just outside of Chicago by an equal number. Interestingly, as the playoffs were set to start Spieth had attained the world number one ranking and then just as suddenly, missed the cut at the NJ event and did again the following week at The Deutsche Bank Championship in Norton, MA.

Going into this week’s concluding event—The Tour Championship at East Lake in Atlanta—the stage is set to determine a number of unfinished items. The most important: who is the PGA Tour Player-of-the-Year? Traditionalists believe any person who wins two majors in a year and has done so in the manner by which Spieth has played, the outcome is clear. On the flip side are those who say Day has played the better overall golf for the long haul of the entire season. The Aussie also starts in Atlanta as the new world number one player.

The top five players heading into Atlanta—besides Spieth and Day—include Rickie Fowler, Henrik Stenson and Bubba Watson. Any of the aforementioned can claim the $10 million prize awarded to the overall winner of the Playoffs with a victory. That achievement would also include taking home the 1st prize check for the event worth nearly $1.5 million.

Since the 5-win season Woods had in 2013, golf has been searching for a new storyline—one that goes beyond Tiger and Phil Mickelson. Day, Spieth and McIlroy are all part of that movement and to his credit Rickie Fowler has shown his desire to be included in the mix after winning three times this season. The missing link for Rickie still remains winning a major. The same for Stenson.

Of the three players Day appears to have the most complete game. Spieth lacks the distance off the tee that McIlroy and Day routinely deliver. However, Rory has been known to be inconsistent on the greens and Spieth makes up for his lack of tee shot distance with top tier prowess with the wedges and putter.

When he was 17 years of age Day confessed to a desire to be the best in the world—to successfully compete against the likes of Woods. At that time the words were uttered from a young upstart with much to show to come even remotely close to that dream. That dream has become reality now. What has made Day so compelling on the course is his resolute focus—the command he summons on all golf shots. His opening 36 holes last week at Conway Farms when shooting 61-63 on consecutive days was nothing more than a clear statement that Day was anything but complacent and was intent on continuing what he done in the last few tournaments.

When looking at the overall stats on both Spieth and Day, the margin between the players is quite small. When the event starts today at East Lake it will mark the 25th start for Spieth—Day will be playing his 20th. Spieth has four wins but the last came just a week prior to The Open in early July. Jordan has more runner-ups 4 to 0 for Day and more top ten finishes with 14 to Jason’s 10. Spieth has the better overall stroke average for the year—68.98 to Day’s 69.16. Clearly, the differences are very small.

My take is a simple one. The man who comes out on top at Atlanta should be selected Player-of-the-Year. The Tour Championship was created to provide a conclusion to a PGA Tour season which started last October—as in 2014. The sad part of this situation is that someone will finish behind the other. At the start of ’15 it looked like last year’s dynamo Rory McIlroy would be the new king of golf for a extended period of time—having won the last two majors in ’14. It is truly hard to imagine that other players have pushed their games to higher heights while the Northern Irishman stumbled—most noticeably when incurring a silly ankle injury when playing soccer with friends prior to The Open at St. Andrews this year.

East Lake was the home club for Bobby Jones until he opted for a quieter location in Augusta to play with his closest friends. The Tour Championship will be played on a layout revamped by architect Rees Jones and has served as host since 2004, along with three prior times with the first coming in 1998. The course has its moment but the key will be the person who can successfully hit greens in regulation. In years past, it has been that skill that has propelled various winners over the years. Coming into the event it would appear to give Day the edge given his sterling play over the last few months.

The only downside to the playoffs has been the lack of visibility given the ever larger shadow caused by both the start of college and NFL action. The Tour has tried to conclude the golf season in a fitting finale and there’s little doubt this week in Atlanta will certainly do that. Going forward, the PGA Tour may need to better position events and realize that having more events only serves to exhaust the key players and pushing golf against a football juggernaut that will never be surpassed makes little sense.

Spieth and Day. The battle for the top of the golf pyramid commences today at 2:00 PM when they are once again paired. While it may not be Ali versus Frazier or Palmer versus Nicklaus, the two top players in the world will start a final end game process with one man emerging at the top. Play away please.