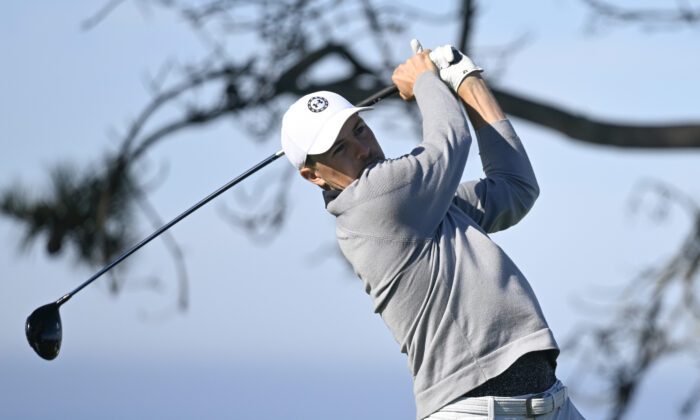 Jordan Spieth hits his tee shot on the 11th hole of the North Course at Torrey Pines during the first round of the Farmers Insurance Open golf tournament in San Diego, Calif., on Jan. 26, 2022. (Denis Poroy/AP Photo)
Golf

PEBBLE BEACH, Calif.—Patrick Cantlay was 12 when his father first brought him to Pebble Beach, and it remains one of his favorite golf courses in the world.

“Every time I’m here I feel lucky, and no different this week,” he said.

Jordan Spieth feels the same way. He has never missed the AT&T Pebble Beach Pro-am, two of those years before he had an endorsement deal with the Dallas-based title sponsor.

“Arguably the most beautiful place in the United States, especially for a golf lover it’s got to be a No. 1 spot,” Spieth said. “And then when we get the forecast that we have this week, it just amplifies how amazing it is to play these golf courses.”

The tournament must be all too happy they feel that way.

Cantlay and Spieth are looked upon to provide the limited star quality — at least among PGA Tour players, not so much the amateurs — with so many other big names taking exorbitant appearance money to play in Saudi Arabia.

Pebble Beach is among the few PGA Tour events where the course is the biggest star. Even so, the lack of top-ranked players — four of the top 25, nine of the top 50 — is hard to ignore.

The tournament lost another top-50 player when Will Zalatoris, the PGA Tour rookie of the year during a season that featured a runner-up finish at the Masters, had to withdraw because of a positive COVID-19 test. He was coming off a playoff loss last week at Torrey Pines.

Missing is Dustin Johnson, a two-time winner at Pebble, and Phil Mickelson, a five-time winner, most recently three years ago. They are part of a Saudi International field that also includes Paul Casey, Bryson DeChambeau, Xander Schauffele and Patrick Reed.

The PGA Tour agreed to grant conflicting event releases provided they play Pebble Beach at least once over the next three years.

Cantlay said the allure of money from Saudi Arabia’s sovereign wealth fund for appearance money is tempting. He described the attempt at creating a rival super league as “complicated.”

“I think with the amount of money they’re talking about, it’s always very tempting. I think it’s tempting for everybody. And to deny that would be maybe not true,” Cantlay said. “But I’m really glad that I’m here this week and I love Pebble Beach. And so that definitely factored into my decision.”

Daniel Berger is the defending champion, hitting a 3-wood into the par-5 18th that secured the win, and it was even greater theater for him to make the eagle putt for the two-shot margin. That sparked him to a big year that ended with his debut in the Ryder Cup, where he went 2-1 and got even more attention for chugging a beer on the first tee.

Spieth won at Pebble Beach in 2017, and even when he wasn’t on his game, he seemed to get a spark on the peninsula.

What to expect this year? Good weather, sure. Spieth, however, is coming off a stomach virus that led to him missing the cut for the first time in a year at Torrey Pines.

It started with a sinus infection, and the antibiotics tore up his stomach, which he said led to him getting an intestinal infection that can cause severe diarrhea and make it uncomfortable to play tournament golf. It wasn’t a good walk soiled, but close.

“The last three holes of the first round I was just trying to get in the house, and then pretty much the whole second round was a tough go for me,” Spieth said.

He was diagnosed with Clostridium difficile, a form of colitis. Spieth said he is feeling better and expects to be at full strength by the opening round Thursday.

Spieth will have part of the old gang back together. He is playing with country singer Jake Owen, as always. They typically play with Johnson and Wayne Gretzky, and there is no shortage of entertainment over three days on three courses.

Newcomers to the sports and celebrity side of the Pebble Beach Pro-Am are Buffalo Bills quarterback Josh Allen and Los Angeles Dodgers outfielder Mookie Betts, along with retired soccer star Mia Hamm.

There will be plenty of laughs during some long days, and scenery that is among the best in the world. The amateurs were left out a year ago because of the COVID-19 pandemic, and only two tournaments — Pebble and Spyglass — were in the rotation.

Now it’s back to normal, minus a number of players who are 8,000 miles away in Saudi Arabia.