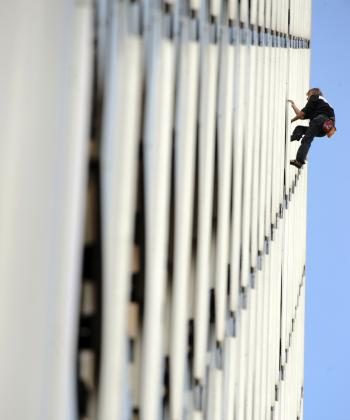 Stephen Jones
View profile
Follow
biggersmaller
Print
‘Spiderman’ has climbed the world’s tallest buildings without a harness or net, but now he has Dubai's Burj Khalifa in his sights.

“I already climbed five of the tallest buildings in the world. Now I want the Burj Khalifa,” he told the National, an English-language newspaper based in Abu Dhabi.

The Burj Khalifa, opened on January 4, is now the tallest building in the world, and Robert expects that it will take six to seven hours to climb.

In the months prior to the opening of the skyscraper, there were no shortage of applications from extreme performing artists wanting to scale it or jump off it.

In April, Eskil Ronningsbakken, an extreme balancing artist said that he wanted to perform a one-handed handstand on top of the building.

The developer, Emaar, has remained tight-lipped about which artists it would grant permission to and when.

There have been a number of illegal attempts to base jump from the building. In 2008, Hervé Le Gallou and another man dressed as engineers to infiltrate the 160th floor of the building, leaped off what was then the summit, at 2,132 feet.

However, their record was broken when Emaar granted permission for two Arab sportsmen, Nasr Al Niyadi and Omar Al Hegelan, to base jump from a crane at 2,205 feet on the tower's opening day.

Robert told the National that he did not want to climb the building without gaining the consent of Emaar.

“I am still patient because you know a lot of people think I’m a naughty boy,” he said.

Roberts has been arrested for climbing-related incidents more than 100 times in 60 countries.