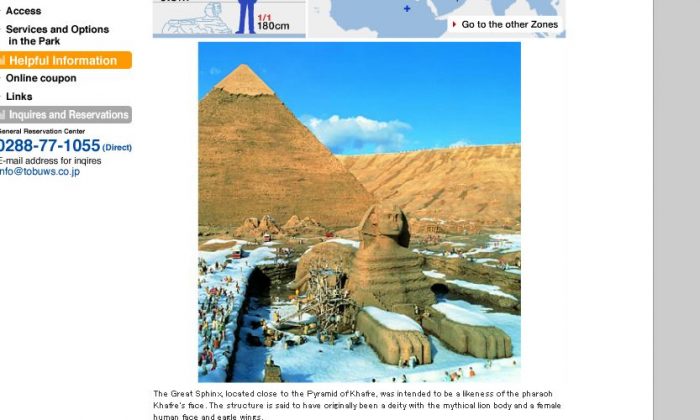 Sphinx Snow? Photo of Egypt’s Sphinx Covered with Snow is a Fake

A photo of the Sphinx covered in snow that is getting heavy social media play is actually not of the real Sphinx in Egypt.

It’s of a Sphinx replica located at a theme park in Japan.

The photo was taken at the Tobu World Square park at an undisclosed time.

The pictures of the Sphinx were shared on Reddit, Twitter, and Facebook, but users noticed that the surrounding area around the statue did not match real photos.

Others noted that the tip of the Eiffel Tower–which is featured as an exhibit at the Japanese theme park–was in the background.

However, several parts of Egypt–including Cairo–experienced its first snow in more than 100 years.

The Tobu World Park has a number of replicas, including the Sphinx, Pyramids, the Empire State Building, the Statue of Liberty, and Versailles.

“ To hand down the precious world heritages for mankind to future generations, we constructed the exquisite reproductions to 1/25th of the original sizes of 102 historic relics and architectures in the premises, which are presently exhibited in the Park,” the park’s website reads