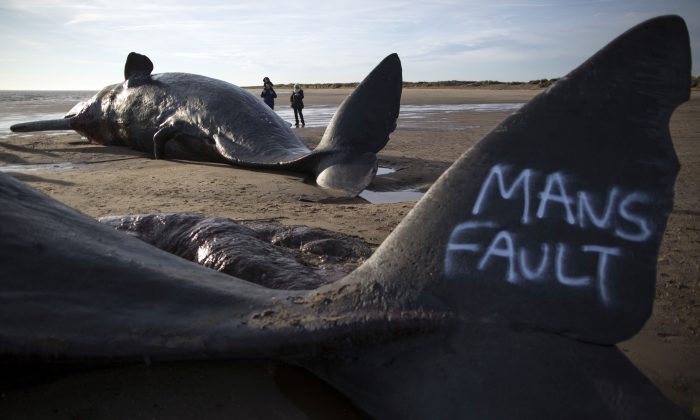 Graffiti saying 'mans fault' is seen on the tail of one of three Sperm Whales that were found washed ashore on a beach near Skegness over the weekend on January 25, 2016 in Skegness, England. The whales are thought to have been from the same pod as another animal that was found on Hunstanton beach in Norfolk on Friday. (Photo by Dan Kitwood/Getty Images)
UK

Sperm Whales Wash up on English Beach, People Vandalize Them With Graffiti

Several whales recently washed up on the beach in Skegness, England, prompting local officials to try and figure out what to do with them.

The sperm whales, which are around 15 meters (48 feet) in length, are thought to have been from the same pod of a whale that died Friday just a few miles from them. A week ago, around a dozen whales of the same species washed up on German and Dutch beaches, CNN reported.

“These are deep water animals, which usually live in pod of 20 or 30 individuals. They probably got disoriented while looking for food and ended up in shallow waters,” Peter Evans, director of Sea Watch Foundation, told CNN.

“We believe that the three whales at Skegness died at sea and then washed ashore,” coastguard official Richard Johnson also said.

And here’s one of me with a dead whale pic.twitter.com/xJ6yuqdOMB

However, there was an outcry on social media after a man was photographed allegedly taking a tooth from one of the mammals.

(*WARNING: A photo of the alleged tooth-removing incident is below. The image is graphic.*)

The outcry continued when after it was discovered people had tagged the whale bodies with graffiti while others took photos. Another person was criticized for taking a selfie in front of a whale.

No dignity offered even after death! Who is this man cutting out the teeth of the #Whale in #Skegness ? pic.twitter.com/4o0LVhoXX2

Must have a seriously sad life if you feel the need to take a selfie with a dead whale. Well done you. #whaledeaths pic.twitter.com/QWE937RD3z

Another painted (sic) “mans fault” on the fin of one of the whales. And another whale had “Fukushima” written on the side, referring to the Japanese nuclear power plant disaster during the March 2011 earthquake in Japan.

The unnamed man who is alleged to have removed a whale’s tooth spoke with the local Skegness Standard newspaper, saying he didn’t remove anything.

Sea Watch said that removing the whale carcasses will take a few weeks. They will be “bulldozed,” according to a BBC report.

Decomposing whale bodies can be a public health hazard, as the internal gas makes them prone to explosions. One of the whales in the U.K. reportedly exploded, CNN said.