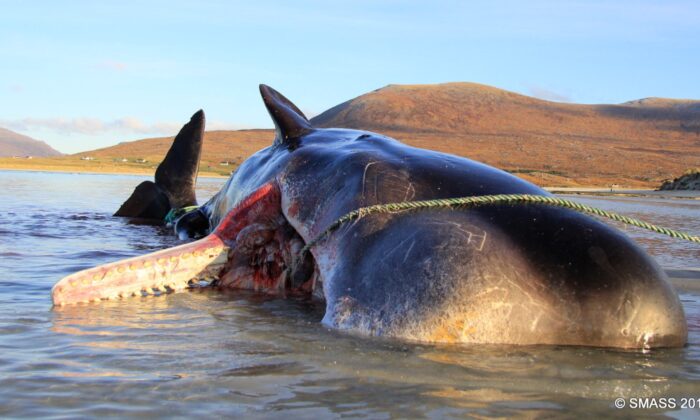 The sperm whale’s carcass was discovered by Isle of Harris residents on Seilebost beach in Scotland on Nov. 28, 2019. (Courtesy of Scottish Marine Animal Strandings Scheme)
UK

A sperm whale was found dead with a 220-pound “litter ball” in its stomach after it became stranded on the Isle of Harris in Scotland, according to reports.

It is not yet clear whether the debris contributed to the mammal’s death, whale experts told the news channel.

The sperm whale’s carcass was discovered by Isle of Harris residents on Nov. 28, on Seilebost beach.

Dan Parry, who watched the contents being removed from the sperm whale’s stomach, told the BBC he found the scene upsetting, and raised concerns about marine pollution.

“It was desperately sad, especially when you saw the fishing nets and debris that came out of its stomach,” he said.

He added that he often ends up picking up litter along the beach itself when he goes for daily walks.

“This stuff could have easily been netting or the like lost in a storm, we just don’t know, but it does show the scale of the problem we have with marine pollution.”

The whale’s carcass was dissected by members of the Scottish Marine Animal Stranding Scheme (SMASS)—an organization that investigates the deaths of dolphins and whales.

“By the time we got to it, it had been dead for 48 hours and pretty much most of the guts blew out of the side when we stuck a knife in it,” SMASS said in a statement on its Facebook page.

“Animals this size are so well insulated that even though the temperature outside barely got above freezing, they don’t cool down and hence decompose incredibly quickly.

“The animal wasn’t in particularly poor condition, and whilst it is certainly plausible that this amount of debris was a factor in its live stranding, we actually couldn’t find evidence that this had impacted or obstructed the intestines,” it added.

The group said the debris—which is thought to have come from both the fishing and land industry—likely caused digestion issues.

“This amount of plastic in the stomach is nonetheless horrific, must have compromised digestion, and serves to demonstrate yet again the hazards that marine litter and lost or discarded fishing gear can cause to marine life.”

According to figures from the organization, the number of whale and dolphin stranding in Scotland are rising, with 204 reports a decade ago and more than 930 last year.

The Ocean Conservancy reported (pdf) that single-use plastic items are common in Southeast Asia and China.

The organization said that in 2017, China, Indonesia, the Philippines, Thailand, and Vietnam dumped more plastic into the world’s oceans than the rest of the world combined.

“We also now have research to suggest that the majority of plastic enters the ocean from a small geographic area, and that over half comes from just five rapidly growing economies—China, Indonesia, the Philippines, Thailand, and Vietnam,” it said in a report published in 2018.

“These countries have recently benefited from significant increases in GDP, reduced poverty, and improved quality of life. However, increasing economic power has also generated exploding demand for consumer products that has not yet been met with a commensurate waste-management infrastructure,” it continued.

The report found that China, namely, was “identified … as the largest source of global leakage,” while adding that it is “responsible for 28 percent of global plastic-waste leakage.” That’s in part due to China’s massive population.

“While China also has a substantial waste-picker population (reports indicate as many as 5 million), they are fewer per capita than in many other countries, and they work from fewer waste-aggregation points,” said the group.