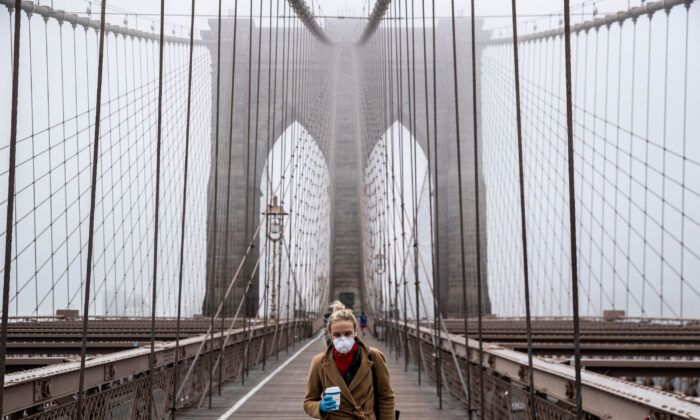 A woman wearing a mask walks the Brooklyn Bridge in the midst of the COVID-19 outbreak in New York City on March 20, 2020. (Victor J. Blue/Getty Images)
Viewpoints

Australian governments have chosen not to properly resource life-saving domestic violence services, says a new petition asking that the next federal budget double funding for victims.

The women’s groups demanding this huge funding boost argue women’s lives depend on this protection: “Every day violence services aren’t fully funded is another day women are left in danger.”

No one would quarrel with providing proper support for a frightened woman escaping a dangerous man.

Our federal government spent $3 billion (US$2 billion) over the past decade on the safety plan to protect “women and their children,” with untold billions added from all the fundraising by state governments, community groups, and businesses across the country. People rightly dig deep for this important cause.

But the unfortunate truth is only tiny numbers of women in this country are actually in peril. Official statistics from the Australian Bureau of Statistics show that just over one percent of women have been physically assaulted by their partners in the past year.

Yet this critical fact is inevitably swamped by statistics which include emotional, psychological, and financial abuse and threats of violence for women over their lifetimes, to give a truly frightening impression of widespread risk for women.

The vast majority of these women are not in a dangerous situation.

The public doesn’t realise they are paying out mainly to help women who are not under threat. They may have unpleasant partners who are reluctant to pay their credit card bills, but there’s just no logic for the billions being spent to “keep them safe.”

Help on Offer for Every Allegation

We have created this moral hazard, inviting all these women to think of themselves as victims and hence eligible for the services now on offer. We see this in the inflated figures shown in police reports, blown out by domestic violence allegations which give women a strategic advantage in family law battles.

No evidence of violence is required to make such an allegation. A woman’s report that she fears violence is enough to set the ball rolling, with the “victim” eligible for financial payouts, cheap services, and support. I’ve made YouTube videos with two New South Wales police officers speaking out about what they see as rorting of the system.

The long list of domestic violence payouts is usually only available to female victims and simply requires someone to support the victim’s story, like a local DV centre, or doctor or police report. It is a system set up to automatically believe the woman and treat men as potential perpetrators.

State and federal governments compete to display their generosity towards victims: the $5,000 federal government’s Escaping Violence Payment; victims’ compensation payments; a Commonwealth four week Crisis Payment; crisis accommodation which even puts victims into motels; help with rent, and priority for social housing; Staying Home Leaving Violence programs which moves the hubby out so women can stay in the marital home.

Meanwhile, male victims have nowhere to go—there’s not a single government-funded centre offering refuge to men. Boys 14 and older are not welcome in women’s refuges which take in their mums and siblings.

Naturally the big end of town happily doles out investors’ dollars to this worthy cause: banks like National Australia Bank give grants to women leaving violent relationships; utility companies offer discounted fees, debt waivers, all manner of special deals (pdf); and there are special arrangements for tenants in rental agreements.

Scales of Justice Tilted in Favour of One Group

Then there’s domestic violence leave, giving victims time off to attend legal proceedings or to organise their affairs. The push is on for 10 days paid leave, a major impost on business which the Australian Chamber of Commerce estimates could cost a cool $2 billion annually (pdf).

The only proof required is the usual tick-a-box system dependent on victim’s stories which employers don’t dare challenge.

For newcomers seeking to arrange permanent residency, the fast and sure route is a domestic violence claim. Law firms everywhere are touting for business in this lucrative field.

Yet this whole list of benefits palls into insignificance compared to the advantages of domestic violence victim status in family law battles.

An unproven allegation of domestic violence can set women up for a smooth sailing ride throughout family law proceedings, creating enormous, costly obstacles for their partners which can destroy the father’s relationships with his children and rob him of much of his life’s earnings.

Some men discover a divorce is on the cards only when police arrive at their door with an apprehended violence order. They are denied access to their homes and perhaps even contact with their children until matters are resolved in the courts, when mums are firmly established as the primary parent with dad on the outer.

The couple is excluded from attending what is normally compulsory mediation and other alternate non-adversarial pathways; victims usually retain a larger slice of the assets in financial settlements, plus the man gets labelled a perpetrator and encounters profound prejudice through the process.

This inflated domestic violence campaign does our society a huge disservice by grossly distorting the numbers of women living with dangerous men—an insult to the normal, caring men of Australia. It is also shameful how little of this massive effort and expenditure protects those genuinely in need.