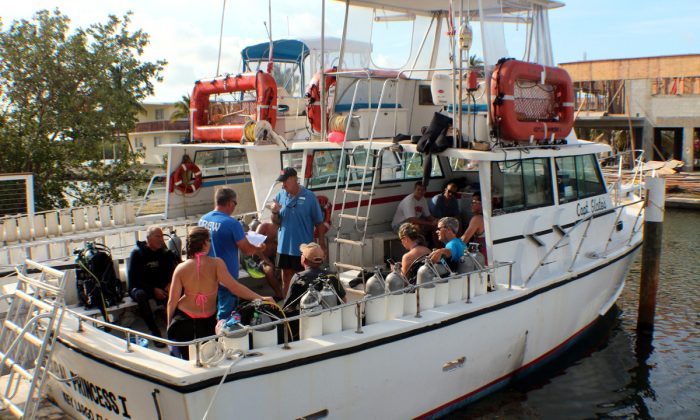 Spencer Slate was born in Winston Salem, North Carolina in 1947. They lived in town but had a pasture behind the house where Spencer kept a horse he rode. “Dad was a farmer. We went out to the farm every weekend.” He joined the U.S. Army and served from 1972 to 1976 as an NCO in a MASH unit.

“I watched Mike Nelson on television in the 50’s and 60s. Sea Hunt got me interested in diving.” An Eagle scout, young Spencer was drawn to water sports. “I got mail order dive equipment from a sporting goods store.”

Spencer dove all through college with the Wake Forest University dive club. He graduated from East Carolina University in Greenville. On breaks he’d come down to the Florida Keys to dive. In 1972 he moved to Jacksonville where he took up a post teaching business in high school. He became a YMCA instructor and taught diving at Jacksonville’s YMCA.

In 1978 Spencer moved to Key Largo. “I borrowed money from a government program to buy a business and boat. When I came to the Keys Steve Klem was a legend. He was called the ‘Pied Piper of Pennekamp Park.’ He befriended me. That’s how I got started feeding critters. I took over Steve’s critters and began feeding some of my own.”

Spencer Slate feeds marine creatures underwater. The interaction enables divers to see large marine animals up close. The State of Florida banned feeding underwater but allows fishermen to chum for fish. The ruling is an anomaly, yet enforced. Spencer Slate respects the law and feeds only in permitted areas more than three-miles offshore in Federal waters where feeding is allowed.

Captain Slate moved his dive operation to newly refurbished headquarters at Mile Marker 90.7 on the ocean side in Tavernier. He moved into his new dive shop, school and compressor facility in February 2014. His three dive boats are moored out back. It is a short passage out Tavernier Creek to the Atlantic Ocean.

Feeding wild marine life is not without risk. Captain Slate now uses Teflon gloves to protect his hands. “The doctor told me if I get one more bite on this finger, he’s just going to cut it off,” he laughed. Magazine articles featured pictures of this veteran diver feeding barracuda from his mouth. He produced a mask that was knocked off his head when a favorite barracuda missed. The mask is chewed up. The skirt is scarred with teeth marks.

“I called him ‘Psycho.’ I’d hold sardines in my mouth for him to take them. That’s a five-foot barracuda. He bit my mouth off. I had to have 29 stitches in my head. That’s the most stitches I ever had. ‘Psycho’ beat me up more than any of them,” Captain Slate recalled.

“I feed here. It is wonderful to see ‘Leslie’ come up to me and dance with me.” ‘Leslie’ is a large green moray eel that Spencer has been feeding on a shallow reef.

“I do it not for show. I do it to demonstrate that these ‘dangerous’ marine critters can interact with divers. Divers can understand them then respect and protect these animals. I do not even have a fishing pole. I take nothing out of the ocean. I don’t spearfish,” he added.

Captain Spencer Slate’s Dive Center is a Guy Harvey dive resort. So far it is the only one in the Keys. They work with the Islander Hotel. Slate is the destination for the Upper Keys. Captain Slate is a National Association of Diving Instructors (NAUI) dive instructor and course director. He is also a PADI instructor. He served as Chairman of the now defunct National YMCA Scuba Program and has been Chairman of the Board of Trustees of Florida Keys Community College. In 2006 Slate ran for Florida State Legislature. “I didn’t win but it was a lot of fun. I wouldn’t say yes if I wanted to say no,” he laughed.

It was no joke. Captain Spencer Slate is his own man. He still has fun diving and he’s been at it 51 years. His 13-year-old son Hunter began diving at 10. His daughter Sky is now 22 and began diving when she was 11 years old.

“Our business was up last year. This after a four year recession,” Captain Slate said. He backed his dive boat into its slip and bid farewell to divers he’d taken out to the reef where he feeds his favorite critters. Everyone had fun and enjoyed the affable company of this diving legend.

Captain Slate wears a gold coin around his neck. “Bob Marx gave it to me. He found it on a shipwreck off the coast of Holland. Bob Straight made the bezel. You see he designed the eel and barracuda and the hand.” The shipwreck coin on its gold chain is a memento from friends in diving.

Captain Spencer Slate is an educator and ocean advocate; a diving personality and friend of wild denizens of the deep.