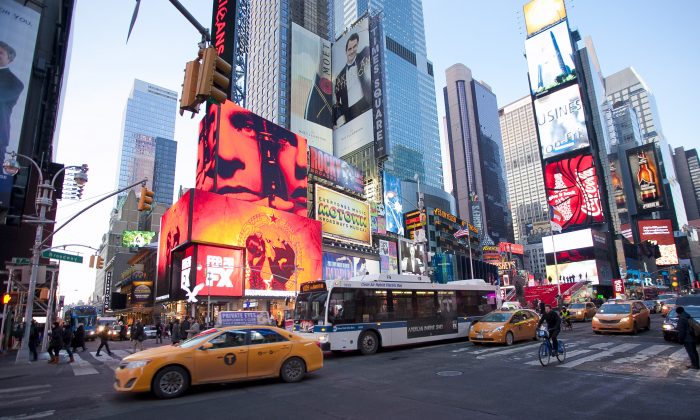 NEW YORK—New York City’s widest streets present both a problem and a solution in terms of traffic safety, which is a mounting concern for New York City residents.

With 23 traffic-related fatalities already this year, and the administration’s Vision Zero roadmap deadline approaching, communities have been active in pointing out the intersections and corridors they feel need to be part of the plan.

Intersections where traffic accidents happen are usually found on wider roads that allow—and encourage—drivers to go a little faster, thus pointing to the problem of speed limits.

To combat the problem of accidents at high speeds, the mayor has asked his Vision Zero task force to consider a significant expansion of the number of 20 mph speed zones across the city.

State officials have also shown support for the initiative, with two bills in the Senate and Assembly calling for 20 mph speed limits citywide. If passed, it would be a first for the nation.

Transportation professor John Falcocchio said a lower speed limit will not be a burden to drivers.

In fact, cars already drive slower than the 30 mph speed limit on many streets, and even slower during rush hours, said Falcocchio.

A large number of cars and the resultant traffic congestion also lower speeds.

New York City ranks highest in the nation for traffic congestion, which translates to drivers wasting an average of 59 hours a year in traffic, according to the annual Urban Mobility Report by Texas A&M University.

Typically, even when a significant number of people stop driving and use alternatives, other drivers will just take their places, according to report co-researcher Bill Eisele.

Much of the city’s traffic is commercial. It involves taxis on short trips, and cars passing through Manhattan to get somewhere else on toll-avoiding routes, said Manhattan Institute senior fellow Nicole Gelinas.

For example, the Manhattan Bridge leading into Canal Street seems like it is always congested, “but people aren’t there because they want to be.” People don’t drive in the city unless they need to, Gelinas said.

The car culture is different in areas like eastern Queens and Staten Island, where residents have less transit options, and many more people drive.

“But, ironically, that’s probably where the lower speed limit is needed most,” Gelinas said.

In those boroughs, there is more space and the roads are wider, which encourages drivers to go faster.

Not only will 20-mph-limits have no impact on traffic, they won’t have much impact on pedestrian safety either—which is exactly the goal of the policy.

The main proponents of lowering speed limits are those who are concerned about safety. An oft-cited federal study states that a pedestrian hit by a car going 40 mph has nearly no chance of surviving. A person’s chances are 80 percent at 30 mph, and 95 percent at 20 mph.

The city has tried to lower speed limits before. A complicated piece of legislation was tabled last year after much work was done on it.

However, the concessions in the bill included leaving higher speed limits for streets like Atlantic Avenue, which spans Brooklyn and Queens, as well as parts of Staten Island—a corridor, which has appeared on at least two lists this year of problem areas the community wants the administration to address.

In comparison to New York City, the top five most densely populated cities in the United States have urban speed limits from 25 mph to 30 mph. However, none of the cities have densities that come close to New York City’s, which has neighborhoods with up to 200,000 people per square mile. Los Angeles, second in the nation for population density, peaks at 94,000 people per square mile, according to 2010 U.S. census data.

Thus, it makes more sense to compare New York City to global cities with similar densities and walkability, said Juan Martinez, legislative director of Transportation Alternatives. New York City is more like London, Tokyo, and Hong Kong—or at least it should aspire to be, he said. By comparison, these other global cities have more access to transit.

London, incidentally, lowered its citywide speed limit to 20 mph last September and predicts a 10 percent lower pedestrian fatality rate as a result. Other areas in the United Kingdom have begun 20 mph pilot programs as well.

Helen Wigginton, a spokesperson for Bristol’s pilot program, said there are some outer areas that are still 30 mph, and the only change in traffic is that drivers may opt for those roads instead of the 20 mph roads.

The alternative to a lower speed limit and enforcement is design, Martinez said, as no one wants to speed on a narrow, one-way road. Making roads narrower reduces speed.

Atlantic Avenue, for example, came up on many lists as an area to address, because it is wide, and drivers are more likely to speed through it.

“There is an untapped resource in every borough,” Martinez said, pointing to Atlantic Avenue as an example. The street cannot only benefit from a pedestrian-friendly redesign, he said, but also from redesign to accommodate a bus lane, which would restrict traffic flow.

Many transportation advocacy groups have pushed for bus lanes. As it stands, the public infrastructure going into place today isn’t going to meet future demand (or current, as many uncomfortably packed subway riders may tell you).

As there are more transit options in this city than most others in the nation, few drive in the city because they really want to, Martinez said, adding that some areas lack good transit options.

But the discussion of a lower speed limit is far from one against cars, as many studies have also shown a trend of more congestion in cities with comparably more public transit.

Car ownership may continue to rise because vehicle ownership numbers go up as population density goes up, UCLA researchers have found. This trend is true even in New York City, where vehicle ownership in the city is about a third of the nation’s average.