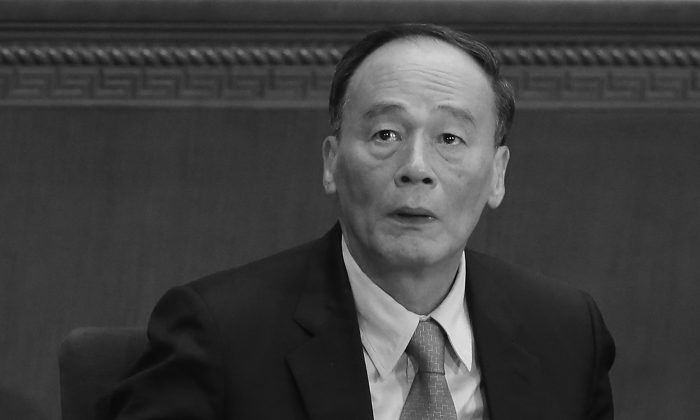 According to Wang, the first type of official that needs serious investigation is one who continued to commit graft after the 18th Party Congress in 2012 (that is the Party Congress at which new Party head Xi Jinping was installed); the second is an official with a lot of complaints filed against them by ordinary citizens; and the third is an official with a history of corruption who is ticketed for promotion.

Zhang Dejiang, Zhang Gaoli, and Liu Yunshan are members of the Politburo Standing Committee of the CCP, the elite body of 7 men who sit atop the Party’s hierarchy. These three officials fit Wang’s description of the second type that must be seriously investigated, as each has lots of complaints filed against him.

These three are also members of the faction of former Party head Jiang Zemin. They fear getting sacked, and they have fought Xi Jinping every step of the way to avoid jail.

In his remarks, the disciplinary official Wang said the goal is to ensure that officials “don’t dare to commit corruption, cannot be corrupt, and don’t want to be corrupt.” He suggested that while the tough anti-corruption campaign has made officials afraid of corruption, the campaign is only treating the symptoms and not the cause of graft.


Wang did not make clear what the cause of graft in the current generation of officials is.

During his term, former Party head Jiang Zemin promoted officials loyal to him and who carried out his unpopular persecution against Falun Gong. Jiang rewarded their loyalty with opportunities for corruption, and they embezzled large sums of money. Their theft of public resources and the resulting huge income inequality led to mass protests and civil unrest.

The Jiang loyalists have been the main targets in Xi’s campaign.

After the 18th Party Congress, Liu Yunshan, Director of Propaganda Department has created incidents to counter Xi’s policies. In January 2013, it is reported that under the command of the propaganda chief of Guangdong Province, Tuo Zhen, who was backed by Liu Yunshan, Southern Weekly newspaper was forced to replace its planned New Year’s editorial with one glorifying the Chinese Communist Party. The original New Year’s editorial, titled Dream of China, Dream of Constitutionalism, called for establishing rights in a constitution.

Zhang Dejiang, another Jiang loyalist and chairman of the Standing Committee of the National People’s Congress, the Communist Party’s rubber-stamp legislature, has also been working against Xi. When Xi Jinping tried to abolish the 60-year-old practice of reeducation through labor early last year, Zhang Dejiang resisted by not implementing Xi’s proposals and basically ignoring his directives.

When Wang Qishan tried to scrap the unwritten rule of impunity granted to members of the Politburo Standing Committee, Zhang Dejiang tried to rally senior officials to oppose it, but in the end Wang succeeded.

After Zhou Yongkang was arrested, Xi Jinping wanted to conduct a thorough probe into Zhou’s numerous crimes including embezzlement, murder, and abuse of power, while Zhang Dejiang insisted on limiting Zhou’s charges to only graft.

On June 10, under Zhang Dejiang and Liu Yunshan’s direction, Chinese officials released a white paper declaring that Hong Kong’s “high degree of autonomy…comes solely from the authorization by the central leadership,” seen by many as Beijing asserting its dominance over Hong Kong’s affairs.

On August 31, the Chinese regime officially declared that Hong Kong’s chief executive must be approved by Beijing’s nominating committee, thus nixing possibility for an open election. The result has been great discontent in Hong Kong, which may lead to mass demonstrations. Analysts say Zhang Dejiang intentionally created chaos to make difficulties for Xi Jinping.

The third member of Jiang’s faction Zhang Gaoli is governor of Shandong Province and party chief of Tianjin. During his term, private equity firms in Tianjin illegally raised money from residents by claiming investments guaranteed by the Tianjin government and investors would be rewarded with high returns.

When the firms were later closed down and investigated, however, the victims were scammed out of 100 billion yuan (US$16 billion).

When a fire broke out on June 30 in Tianjin that claimed more than 300 lives, many of them women and children, Zhang Gaoli ordered a ban on media reports.