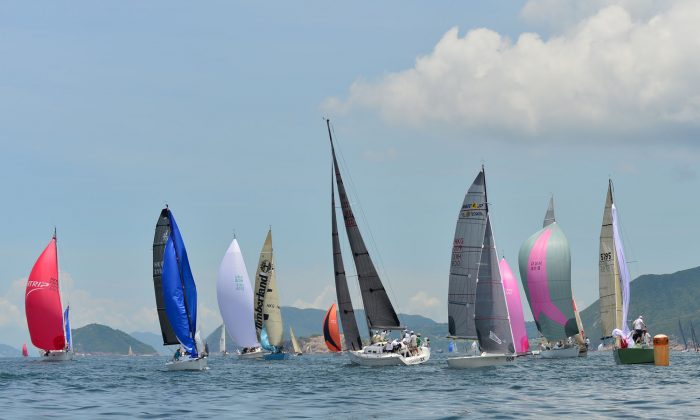 HONG KONG—A seasonal downpour started Day-3 of the Quest Yachting Typhoon Series at Hebe Haven on Sunday July 6 and during the Race-Officer’s briefing (before leaving the Jetty) messages were being received from boats on route saying “not much wind out here”, giving Race Officer Toby Jenkyn-Jones little encouragement.

It was still raining as the Committee Boat set off, but skies were looking brighter. The forecast did not indicate much improvement in wind conditions and any wind that did appear was expected to tail off during the afternoon.

As the start time of 11am approached there was a distinct improvement in conditions as up popped a westerly airstream. Jenkyn-Jones decided on short Island Courses so that the races could be finished in the early afternoon, before the wind was expected to die away.

Conditions were surprisingly kind with a good breeze filling the sails and good progress was made by all competitors. The skies brightened and out came the sun and the display of colour along the route from the 65 competitors was spectacular.

All starts were a little tense with many boats leaving their run until late to get a better line on their initial tack. Many boats converged on the Start Boat as the one-minute horn sounded and some boats were seen to abort their run as they were blocked from rounding the stern of the Committee Boat. The IRC-A and –B got off to a good start, but the IRC-C start was particularly fraught with several boats getting tangles together and taking a little while to free themselves.

By the time all boat Divisions had started, the Big Boats (IRC-A and –B competitors) were already sailing past Shelter Island and heading for Trio, but with a fast run in one of the safety boats, it was possible to catch up with the HKPN boats as they progressed towards Table Island. By this time the lead IRC-A and –B boats were rounding Trio Island and the lead boats, notably FreeFire were already heading for Bluff Island.

Heading for the Big Boat line there were beautiful views of spinnakers in many colourful shades heading in the same direction downwind.

The Bluff Island Mark was a perfect spot for a spectacular view of the races for all Divisions. With so many boats on the water and IRC-A and –B boats rounding the Mark in the opposite direction to all other competitors there was some quick thinking and adjustments needed by skippers to avoid disaster … but all seemed to work out all right.

Luckily, the wind kept flowing until all boats reached what in the end was an early finish.

IRC-A
FreeFire took line honours by some six minutes ahead of Signal 8 but it was EFG Mandrake that finished in first place on corrected time. Signal 8 came second and FreeFire was 3rd.

IRB-B
Lighthorse took Line Honours but on corrected it was Sell Side Dream, Stella and Blackjack that took the first three places.

Sports Boats
Merlin secured first place in the Sports Boat category finishing two and a half minutes ahead of Sidewinder with Black Magic finishing another two minutes later.