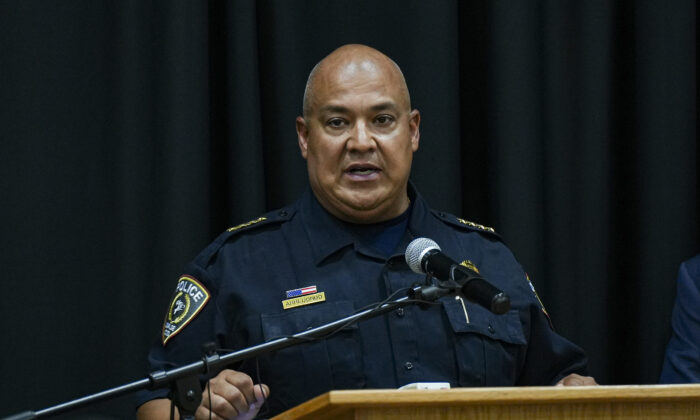 The Uvalde Consolidated Independent School District (CISD) on Friday canceled a special board meeting that was scheduled to discuss whether to terminate the employment of the school district’s police chief.

The meeting was scheduled for 9 a.m. on Saturday but was canceled at the request of Arredondo’s attorney, the school board said in a statement.

“In conformity with due process requirements, and at the request of his attorney, the meeting to consider the termination of Chief Arredondo will be held at a later date which has yet to be determined,” the statement read (pdf).

In the meantime, the school district said it was cutting off Arredondo’s pay while on leave.

Arredondo was placed on administrative leave in June following growing criticism over his failure not to immediately breach the classroom where gunman Salvador Ramos was fatally shooting students at Robb Elementary School.

He faced mounting blowback from parents and officials, and at the time, around 120 Uvalde residents joined a school board meeting on June 20, calling for Arredondo to be sacked.

During state Senate hearings in June, Texas Department of Public Safety (DPS) Director Steven McCraw said officers waited for 77 minutes before killing Ramos despite there being “a sufficient number of armed officers wearing body armor to isolate, distract, and neutralize the subject.”

None of the officers tried to break down the door to get into the classroom at this time, which officials later said was the “wrong decision.”

Arredondo believed “more equipment” and officers were needed for a tactical breach, according to McCraw, who said Arredondo also thought the situation had changed from an active shooter to a barricaded subject and that “there was no kids at risk.”

“What are you going to do Pete? I know he’s not the only one. But at this point in time he is the main one. The fact of the matter is, at the end of the day, he failed these children, he failed the schools, he failed everybody,” Javier Chavez told school board members at a July 18 board meeting. Chavez is cousin to victim Amerie Jo Garza.

The Texas state House of Representatives on July 17 published a 77-page report noting that there were “shortcomings and failures” across the board by both law enforcement and the Uvalde CISD in its handling of the May 24 shooting.

The state committee determined, in its report, that Arredondo, who was one of the first responders on the scene, “failed to perform or to transfer to another person the role of incident commander” on the day of the shooting, which left 19 students and two teachers dead.

Video footage from inside the school revealed that police stood in the hallway armed with high-powered rifles and a ballistics shield at least 19 minutes after the gunman entered at 11:33 a.m.

Law enforcement failed to quickly confront Ramos on the day of the shooting, taking more than 75 minutes to neutralize the shooter after he entered the building.

Uvalde City Mayor Don McLaughlin said on July 17 that he agreed with the committee’s review, which found there was a “failure of command.” He noted that the city still wanted answers about who was responsible for taking command and what specific actions were taken by each agency on the day.

In light of the report, Texas DPS said on July 18 that they will conduct an internal review into the actions of state police who had dozens of troopers and agents on the scene during the slow and chaotic response.