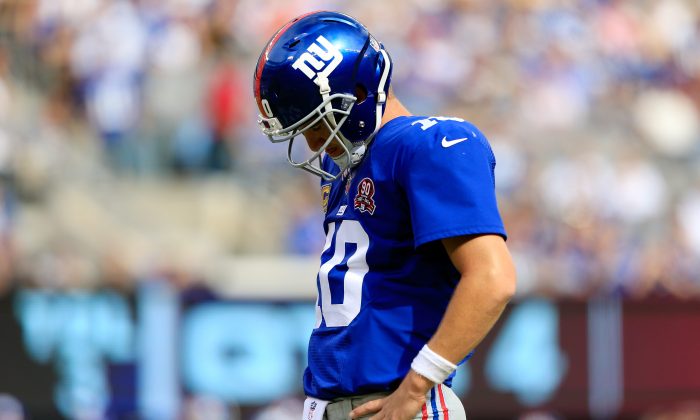 EAST RUTHERFORD, NJ - SEPTEMBER 14: Quarterback Eli Manning #10 of the New York Giants reacts after a fumble in the fourth quarter against the Arizona Cardinals during a game at MetLife Stadium on September 14, 2014 in East Rutherford, New Jersey. (Photo by Alex Trautwig/Getty Images)
News

An outbreak of penalties, a shaky Eli Manning and crucial turnovers led to an unhappy Tom Coughlin at MetLife Stadium.

“We’re always disappointed to lose,” Giants head coach Tom Coughlin said in a press conference on SNY. “We’re all men. Stop feeling sorry for ourselves. We had an opportunity but it slipped and there’s nobody to blame but ourselves”

The Giants were down 14-16 with about 10 min left in the fourth quarter until Cardinals WR Ted Ginn ran back a punt for a 71-yard score (Failed 2-pt conversion). Briefly after, Giants’ safety, Quntin Demps fumbled off of the kickoff and gave the ball right back to Arizona. The Cardinals would eventually kick a 32-yard FG to take a commanding 25-14 lead.

“I just didn’t secure the ball fighting for extra yards,” S Quintin Demps said on his fumble via Giants press release. “We talk about it all the time. It’s nobody’s fault but mine. I have to protect the ball.”

“Looking at my career, I really don’t fumble. I know I have to get it together ASAP. There’s not a time or place for that [fumble].”

Giants QB Eli Manning day fluctuated frequently. Manning’s first drive eventually resulted in a interception by outside linebacker Sam Acho. In the second half, Eli’s day didn’t get much better by only connecting on 13 passes out of 24 dropbacks and threw another interception on the final play of the game by Larry Foote.

“We’ll find a better way to win some of these tight games,” Eli said at his post-game press conference. “We’re still definitely improving. I thought we did a good job in changing a number of plays but it wasn’t enough.”

Less than two hours before kickoff time at 1pm ET, the Arizona Cardinals announced that QB Carson Palmer would be ruled out because of a shoulder injury and that QB Drew Stanton would replace him. Stanton made a great impression in his debut as he tallied up a total of 167 yards off of 14 completions and led five scoring drives.

Cardinals head coach Bruce Arians thought QB Carson Palmer would be under center on Sunday. However, according to Cardinals reporters, Palmer himself said that “he wasn’t even close” to playing against the Giants which leaves very little optimism in him playing next week against the San Francisco 49ers.

The Giants are undergoing another horrendous 0-2 start to the season and will need to have a better performance when they face the Houston Texans next Sunday. (9/21 @ 1:00pm ET.)

“We’ve got to go in there and this is what the work week consists of – going in,” WR Victor Cruz said in a press release. “Watching the film, understanding the things we did wrong and continuing to learn. That’s why they put us in this position and that’s why we have to learn quickly and move on.