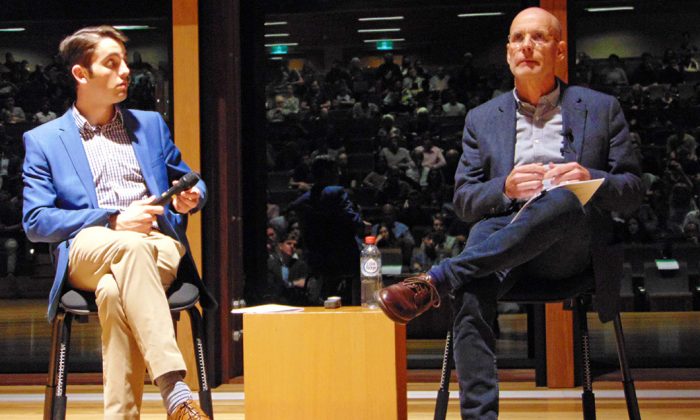 The Australian government is setting up a task force to protect the freedom of expression at universities countrywide, amid concerns of foreign influence by the Chinese Communist Party (CCP).

The University Foreign Interference Task Force will bring together representatives from universities, national security organizations, and the Department of Education, federal Minister for Education Dan Tehan said in an address to the National Press Club in Canberra on Aug. 28.

The new initiative will safeguard freedom of speech and academic freedom for all Australian university students and staff, Tehan said.

“Universities are at their strongest and most relevant when they provide a platform to a diversity of views and provide freedom from the pernicious threat of groupthink,” Tehan said.

“What is the value in freedom of speech if people are too afraid to say what they think? The sense that some students and staff at universities are self-censoring—out of fear they’ll be shouted down or condemned for expressing sincerely held views and beliefs, or for challenging widely accepted ideas—should concern us all.

“The test of our commitment to free speech is whether we are willing to tolerate the speech of others, especially those with whom we most disagree. We must foster the ability to listen to others’ viewpoints and encourage an environment where disagreement does not involve verbal attacks or threats.”

The task force will develop “best-practice guidelines” to deal with foreign interference, against a November deadline. The team also will update the national Quality Indicators for Learning and Teaching (QILT) survey questions to seek student feedback as to whether they feel encouraged to voice “non-conformist opinions” and have freedom of expression on campus.

“I believe universities want to know if students and staff are afraid to discuss certain topics,” Tehan said. “It is only through diversity of thinking, perspective, and intellectual style that we get innovation and problem-solving. This is the kind of thinking that universities are there to encourage, [and] I ask the sector to also seek the views of their staff on this matter.”

“We have yet to see one Australian university draw a line in the sand and make it clear that it is willing to take the pain in defense of our political freedom and free speech on campus,” Hamilton said at a public presentation held at the University of Queensland (UQ) in Brisbane on Aug. 28.

“CCP Influence in Australian Universities.” My lecture at the University of Queensland can now be read here https://t.co/xLIcAcCpSY

Hamilton suggested that universities hadn’t acted sooner because they rely on revenue from China and are influenced by Beijing’s United Front groups that exist in part to protect the CCP’s image abroad.

“Corporatization of the tertiary sector and the extraordinary dependence of many universities on revenue from China, coupled with a sustained and highly effective influence campaign directed at senior university executives by various United Front bodies, has meant that many vice-chancellors and other senior executives have lost sight of the actual meaning of academic freedom,” he said.

Hamilton said UQ Vice Chancellor Peter Hoj backed the appointment of Brisbane Chinese Consul-General Xu Jie as an adjunct professor of language and culture at the university on July 15, for a 2 1/2-year term without pay.

He said the Chinese consulate website had uploaded a story, which has since been removed, stating that UQ’s adjunct professorship is given to “very few scholars who play unique roles and make significant contributions … and to date are only given to a very few.”

“While defending the decision to appoint the consul-general, professor Hoj reassured us by saying professor Xu would not be doing any teaching,” Hamilton said. “Well, he is of sufficient authority to be a professor. Why can’t he give some lectures?”

Hamilton noted that UQ previously appointed then-Consul-General Zhao Yongchen as an adjunct professor in language and literature in 2014, and that Zhao gave a lecture at the university in 2015 on “China–Australian cooperation.”

Hamilton also pointed out that Hoj had recently been endorsed by Hanban, the Beijing-backed authority that oversees the controversial Confucius Institutes, which are hosted by universities around the world.

“In 2015, UQ news announced that professor Hoj had been honored by the Hanban as the outstanding individual of the year,” he said. “This prestigious award, as UQ called it, was in recognition of his contribution to the global Confucius Institute network. China’s last Vice Premier Madame Liu Yandong presented the award herself.”

“Chinese students at University of Queensland (UQ) in Australia were irritated after an anti-China lecture held on campus spread rumors that China was infiltrating Australian universities.” https://t.co/hhi76umlla

Hamilton cited a recent example that illustrated the concerns regarding foreign interference, when several students who erected a mosaic wall on the UQ campus to show their support for the anti-extradition protests in Hong Kong found their work had been damaged by pro-Beijing sympathizers who claimed to be protecting the Chinese consulate.

“A university security guard confronted a few men who were tearing down a Lennon Wall and then refused to show student IDs,” Hamilton said. “When the guard indicated that if they did not, he would call the police, the leader of the three men said, ‘I don’t care if you call the police, I will call the ambassador.'”