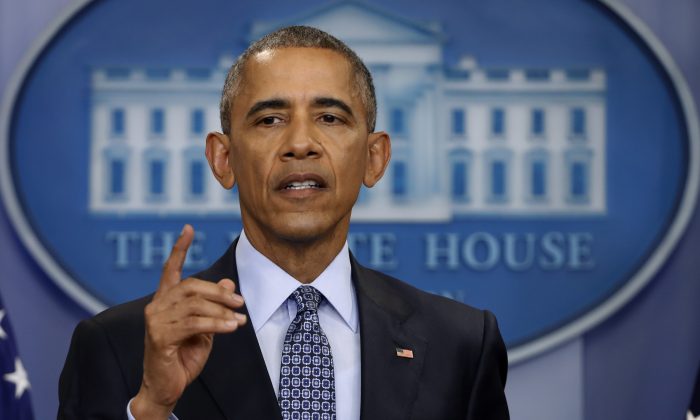 Various media reports have reported that the United States intelligence agencies wiretapped Paul Manafort from 2016 to 2017, including during his brief stint as campaign manager of Trump’s presidential campaign in 2016. The snooping was reportedly authorized by the Foreign Intelligence Surveillance Court (FISC).

When asked if the conversations between Trump and Manafort were picked up by the wiretapping, former Director of National Intelligence James Clapper told a CNN anchor on Sept. 20 it was “possible.”

However, in March Clapper had categorically denied that such FISC orders existed on “anything at Trump Tower.” In the same media appearance he also asserted there was “no such wiretap activity mounted against—the President-elect at the time, or as a candidate, or against his campaign.”

It turned out the FISC warrants indeed existed; the secret orders were against Manafort, who had lived in Trump Tower since 2006; Trump’s former campaign manager was snooped upon, and the President-elect of the United States was highly likely eavesdropped on as well.

Was Clapper trying to mislead the public? Was he hiding something for someone? Or was he a complete outsider in the Obama administration and didn’t know about the intelligence being collected by agencies he supervised?

One unintended consequence of Clapper’s self-contradiction is the credibility of Trump’s claims of being wiretapped by the Obama administration just got a boost.

Some claim Manafort must have done something wrong because the FISC issued snooping orders against him. That is not necessarily true. According to the Department of Justice (DOJ), FISC rejected only 11 of the more than 33,900 surveillance applications by the government from 1979 to 2012, an approval rate of 99.98 percent.

In comparison, the average conviction rate of Federal prosecutors in the United States was 92.8 percent in the 2015 fiscal Year.

FISC is supposed to oversee the surveillance activities against foreign agents and terrorists in the United States. However, the only thing it seems to be eagerly rubber-stamping is almost every request from the National Security Agency (NSA).

The supporters of the wiretapping also miss the point: the country we are living in has turned into a surveillance state. The laws designed to protect American interests against foreign spies and terrorists are increasingly being used to monitor American citizens. The Obama administration may have used the intelligence agencies to damage or weaken its political opponents.

A FISC opinion in 2011 held the NSA’s covert collection of internet communications violated the Fourth Amendment. According to the opinion, the agency gathered approximately 56,000 American emails a year at the time.

A 2014 investigative report by the Washington Post revealed 90 percent of internet account holders in a large cache of intercepted records were not the intended targets. Nearly half of the files belonged to U.S. citizens or residents. Their information was scooped up only because they mentioned the names of a target, or visited the same website a target visited, or simply wrote an email in a foreign language, or appeared to use a foreign IP address.

American journalists were of particular interest to the government. In 2009, James Rosen of Fox News became a subject in a leak probe. Emails of Rosen’s personal Gmail account were seized, as were all his correspondence with the suspected source at the State Department. In addition, President Obama’s Department of Justice (DOJ) demanded Google turn over IP addresses and other metadata stored in Rosen’s Gmail account. Rosen’s activities at the State Department were also tracked by the security badge access records.

In an unrelated leak probe, the Obama DOJ secretly collected phone records of more than 20 separate Associated Press telephone lines in April and May of 2012. Phone communications of more than 100 journalists might have been affected, the majority of whom did not even work on government-related projects.

The Obama administration insisted the information gathered in Rosen’s and AP’s cases was obtained legally. However, an email published by the Wikileaks painted a different picture. Fred Burton of Stratfor, an American intelligence company, wrote in an email dated Sept. 21, 2010: ”[John] Brennan [then Obama’s Homeland Security Advisor] is behind the witch hunts of investigative journalists learning information from inside the beltway sources.” He also mentioned in the same email that the Obama White House had set up a special task force to “go after anyone printing materials negative to the Obama agenda.”

The spying against the journalists may not be as simple as the government wants us to believe.

Yet the most chilling thing about the secret information collected under the Obama administration is that the intelligence agencies may have metamorphosed into an American KGB used to monitor people deemed “unfriendly” by the administration, including Obama’s successor.

Among Trump’s advisors, at least three were wiretapped by the government under FISC warrants: Carter Page, Michael Flynn, and Paul Manafort. Communications of Attorney General Jeff Sessions and Jared Kushner were “incidentally” scooped up.

Trump’s entire presidential transition team might have been secretly surveilled by the feds monitoring other targets and then improperly distributed throughout spy agencies.

Many Obama aides requested unmasking of Americans whose names showed up in the intercepted materials, including Trump’s associates. One of the most prolific unmaskers, Samantha Power, Obama’s ambassador to the UN, made more than 260 unmasking requests in 2016. Former CIA director John Brennan couldn’t recall any former ambassadors to the UN requesting unmasking in a House hearing.

I guess only a few in the Obama administration knew what Power was up to.

It appears Trump and his team were surveilled by the Obama administration before, during, and after his presidential campaign. What we don’t know is the motivation behind the snooping.

It could be legitimate and “incidental” collection, as the Obama administration claimed; it could also be illegal and intentional spying on a political opponent, with the intent to prevent Trump from winning the presidential election.

Either way, the government may have been out of bounds in domestic intelligence gathering. The laws may have been abused by some in the intelligence agencies for personal and political gains. To get to the bottom of this matter, I believe it is time for Attorney General Sessions to appoint an independent counsel.