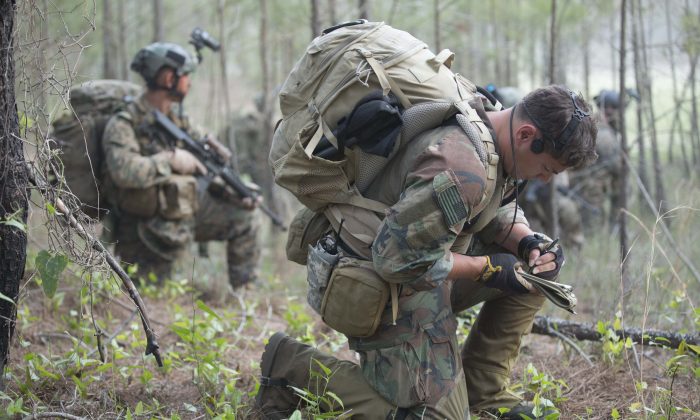 Special Operations Forces (SOF), such as the Navy SEALs and Delta Force, may soon get a new type of technology that gives them additional eyes on the ground, make airstrikes more accurate, and help them better discern enemy fighters from civilians.

Using this new technology, troops will be able to livestream video back to command, see through each-other’s eyes, track targets, and call in air strikes—using just their smartphones.

The new technology could roll out soon. The company that develops it, CrowdOptic, received a rapid prototyping request from SOFWERX, which is a partnership between Doolittle Institute and U.S. Special Operations Command. Under the request, which CrowdOptic received on Sept. 8, they are expected to have a working prototype available by Sept. 30.

According to CrowdOptic CEO Jon Fisher, the technology works on just about any device with a sensor, from smart glasses to drones, but they’ll be starting with smartphones since troops with SOF use personal phones as their main communication devices while on the field.

“It’s the phones first because that’s what’s everywhere for the military,” Fisher said.

The technology works by linking data between multiple devices and finding common information between them. It can also detect the direction a device is facing, and Fisher noted “with that type of content you can do some incredible things.” This opens many doors for new technology that Fisher said could benefit anyone from warfighters to firefighters, and in industries from police work to entertainment.

The technology has been framed before as a tool that lets you “see through walls.” This is partially true, since by using smart glasses and syncing them with cameras fixated in various locations, a wearer can look in the directions of different cameras to see what they see. The CrowdOptic technology is being used this way by San Francisco Zoo’s wolf exhibit.

Since the technology can sync multiple devices and find common information, it can also be used to interconnect what various people are looking at through smart glasses. The Denver Broncos are using CrowdOptic technology, for example, to detect where fans are looking on the field, and to use this data to find the best camera angles of the action.

When it comes to the military, all of these functions could prove useful. If a troop spotted a potential enemy, they could share the video feed with their squad or with command to pinpoint the location and to verify whether it’s actually an enemy fighter—which could remove some of the confusion that is often the norm on a battlefield, while also reducing chances of mistaking a civilian for an enemy fighter.

Fisher said one of the key features they’re developing for the military is what they call “triangulation.” Most phones these days have GPS built into them, but if you were to point the phone at a car driving by, it wouldn’t be able to track the GPS location of the vehicle. The reason is that since it’s a single device, it sees objects on a 2-dimensional plane. But since CrowdOptic syncs data from multiple devices, a squad of Navy SEALs could point two or three smartphones at a vehicle, and the technology would be able to pinpoint its GPS location, even if the vehicle is moving.

“The location of your phone is found through triangulation of GPS,” Fisher said, adding that CrowdOptic takes this a step further by using “a few devices looking ahead of you to find the common location.”

Technology like this could help ensure, for example, that an airstrike doesn’t miss its mark—and this could also help reduce accidental civilian deaths on a battlefield.

Fisher added that within days of getting the contract with U.S. Special Operations Command, his team was able to further perfect the triangulation technology. He said it can now be used with a single device, noting “we freeze the sight lines on the server, then the single user can intersect with himself as if he is multiple users.”

In other words, a troop could point a smartphone at a building with enemy combatants, then move the phone to a different angle one or two times, and they’ll have created the multiple lines of sight needed to pinpoint the building’s GPS location.