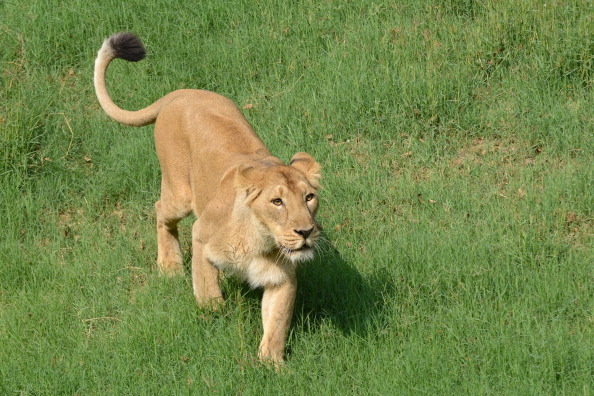 If you thought individual names were only for pet animals, you’re wrong! Forest officials – including the trackers and beat guards – of the Gir Forest National Park have a long standing tradition of giving the big cats in Asia’s only natural habitat of lions interesting and apt names based on their behavior in the wild.

Gabbar Singh is an adult male lion who was kicked out of his territory in Dhari recently after he killed two young lion cubs. Gabbar Singh apparently did not like the cubs disturbing him when he was trying to spend some intimate moments with the cubs’ mother.

Gabbar Singh, as the infamous lion is popularly known in the area (after a hugely popular villain’s name of an epic India movie), was named so after the lion got into fights with at least 3 to 4 lions in different territories before it killed the two cubs. It has since become nomadic after being driven out of his territory by another adult lion.

Gabbar has been moving around in search of new territory to settle down after the humiliating defeat. The latest report of the rogue lion came from Savarkundla when local villagers phoned the forest authorities and asked them to relocate the beast that had been roaming the area.

However, Gabbar is not the only lion to be given a unique name. Forest officials reportedly identify almost every pride by individual names. Other humorous but apt examples of such naming are that of Osama Bin Laden (not the terrorist responsible for 9/11) – the lion with a fearsome demeanor, and of course the Karan-Arjun siblings who roam the forest together, almost always.

This tradition of naming lions has gone as far as forest officials holding naming ceremonies for new born cubs such as the one held earlier this year for five cubs born to a lioness called Laxmi.

“Many feel that the lions should not be named. However, the beat guards and trackers who are closely associated with the movement of these big cats feel that naming the lions helps develop a certain intimacy with the beasts and also makes the men-on-duty  feel that the animals are part of their own family,” said Anshuman Sharma, deputy conservator of forest (DCF), Dhari range.

Sharma further added that the lions were usually named according to their individual behavior. For instance, an old lion in Dhari range has been named as Bhagat (or priest) since it has never hurt anyone nor has it ever tried to capture territory. The lion seems to be satisfied with its territory, and hence the trackers of that area thought it appropriate to name it as Bhagat.

The DCF of Gir West, Kasuladev Ramesh, echoed similar sentiments when he mentioned about an old lion living in the tourism zone. The lion has been named as Mullah because of its priest-like behavior. It hunts only for food, and it has never attacked other lions or killed any cubs.

However, quite a few lions have also been given peculiar names because of their distinct physical conditions. For example, Bandi – a famous lioness in the tourism zone – was so named because she had lost her tail. Beat guards have since always identified her as Bandi. Likewise another lioness called Dhari, also known as Langado, was so named because she moved with a limp.

Karan-Arjun: These two brothers in Mahuya have earned the nicknames of Karan and Arjun from local villagers since they are always seen together, even when hunting. Moreover, these two siblings closely resemble each other in appearance and also follow each other closely. Forest officers report that the villagers fondly refer to the duo as ‘Humare Karan Arjun’, or ‘Our Karan Arjun’. The names are again influenced by an Indian movie that has two of India’s best know heroes playing the role of brothers, Karan-Arjun.

Osama bin Laden or Atankwadi (Terrorist): These two names are quite popular for those lions that harm other lions not only from their own pride but also from other prides in nearby areas. A lion known as Atankwadi in Mityala is said to frequently visit territories of other lions and attack the lions as well as their cubs. These rogue lions are also known to attack young adult males of their own pride.

Collared: This particular lioness has been named by the locals of Liliya village as ‘Collared’ since it wears a radio collar around its neck which scientist attached for research purpose. The local villagers are so fond of Collared that once when she was caught in Gondal town when she wandered there, the villagers launched an agitation to get her back. Similar agitations took place when the forest department decided to cage Collared and keep her in Sakarbaugh Zoo. The people even wrote letters to the department. The lioness was eventually released and sent back to Liliya.

Roopsundari (Female Beauty) and Gulab(Rose): These popular names belong to two female cubs that are said to be very beautiful. While Roopsundari can be seen moving about in the areas around the villages in Savarkundla and Dhari, Gulab is a major tourist attraction in Sasan.

Tofani Kanudo: This is a phrase often used for naughty people, and also commonly found on the rear end of vehicles in Jungadh and Amreli. However, beat guards in the coastal areas of Rajula use this phrase to refer to one of the lion cubs in the area. The cub is reportedly very naughty and often goes missing, even forcing forest officials to launch search missions to trace the missing cub.

This article was originally written and published by Rohit Daniel, a contributing writer for indiasendangered.com. For the original article and more information, please click HERE.