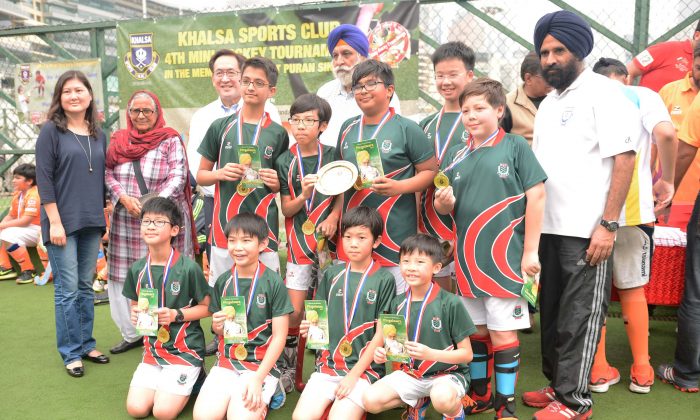 KCC A, U12 Plate Winners of the Khalsa, hockey mini-tournament, held at Happy Valley, Hong Kong on Saturday March 19, 2016. Dr. Bibi Inderjit Kaur (Middle 2nd L) is in the photo.(Eddie So)
HK Hockey

Khalsa Sports Club and the Khalsa Sikh Temple, invited guest Dr. Bibi Inderjit Kaur to help officiate in the prize-giving ceremony handing out medals and trophies to children who performed well at the Khalsa mini-tournament held at Happy Valley on Saturday March 19, 2016.

Dr. Kaur holds a Bachelor of Medicine/Bachelor of Surgery degree (M.B.B.S) and numerous awards for her humanitarian work for the needy, disabled and orphaned children along with the poor in India. She was pleased the Hong Kong Sikh Community works well with the local community.

“Regardless of your race or your religion, it is most important that we all work with each other to live side by side in harmony and peace,” said the 74-year-old Dr. Kaur, who was making her first trip to Hong Kong.

She was pleasantly surprised with the outcome of the over 700 plus children of various ages and ethnicity who were participating in a mixed gender format of Under-8s, U10s and U12s children’s events as they occupied the length and breadth of both artificial pitches at Happy Valley.

Dr. Kaur who hails from Punjab was especially happy and hoped her message of love and affection for her fellow human beings would bode well as she cited children as ‘blooming flowers of god’.

During her three days spent here she spoke of Phagat Puran Singh, the founder of Pingalwara a Non Government Organisation (N.G.O.) in Punjab who worked to look after orphaned children, the disabled, the poor, and the destitute and homeless, regardless of their ages until his demise at age 78. She took over as president of the N.G.O. in 1992.

Some of the children competing in the tournament were unaware of Dr. Kaur’s mission only looking at the event as an outing with one boy, Jestin Baath, with a Batman logo painted on his face smiling as he said he found it was an enjoyable day spent playing hockey alongside his friends.

“This is my fourth tournament but I thought I would be playing for Khalsa but instead am playing for a Akal/Khalsa combined team,” said Batth who studies at PLKLMCEM School, To Kwa Wan.

Eight-year-old Caitlin who plays for Valley as a defender was just as enthusiastic, claimed this was her fourth tournament and she enjoyed it as it allowed her to play against different teams.

“I like playing hockey and this tournament gives me a better understanding of the game,” she said.

Eddie So is a seasoned sports journalist and photographer, and has worked for a number of media companies in Hong Kong over a period of more than 20 years.