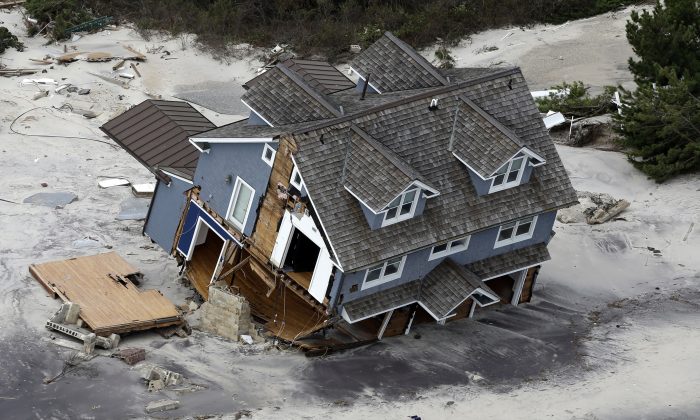 A house along the central Jersey Shore coast was destroyed by Superstorm. New Jersey got the brunt of Sandy, which made landfall in the state on Oct. 29, 2013. (AP Photo/Mike Groll)
New York

NEW YORK—Superstorm Sandy unleashed its winds one year ago, but turbulence lingers today. Sandy has forever changed the thinking about—and planning for—superstorms of the future.

One year after the salt water rushed into city-dwellers’ basements, bedrooms, and workspaces, the businesses are up and running and most people are back in their homes.

Remembering what we went through—the suffering and the lows, as well as the tremendous outpouring of generosity—speeds the healing process. Knowing about preparations for the next superstorm helps us move into the future.

We saw humanity’s resilience, over and over again, as we collected people’s stories for this commemorative edition.

The financial and emotional impacts of the storm remain. The faces of people in the areas most impacted by Sandy were strained with memories of the evening of Oct. 29, 2012 as we talked to them.

New York City did not take a direct hit from the eye of the massive storm, but it was in the direct path of an onshore wind field that extended for 1,000 miles, causing a record storm surge and unprecedented destruction along the shorelines.

A surge tide of 14 feet at Battery Park shattered the previous record of 10 feet set in 1960 during Hurricane Donna. When Sandy was through, 51 square miles of New York City was flooded—that’s 17 percent of the total landmass, and nearly 20 square miles more than existing flood maps had identified.

Returning to the neighborhoods hit by the storm, our reporters were deeply stirred. One struggled to maintain composure, saying her own Sandy story has not been told. She asked herself, “Is it New York City’s story I am writing, or is it my own?”

Although each person’s story is unique, the accounts in these pages have a striking commonality: disbelief at first, followed by fear when the water came, then resolve to survive, and then determination to pick up the pieces.

See our Oct 2012 Live Blog and Photo Blog of Hurricane Sandy as the dramatic events unfoled one year ago.

Check for updates to our ongoing Special Coverage of Superstorm Sandy One Year Later.