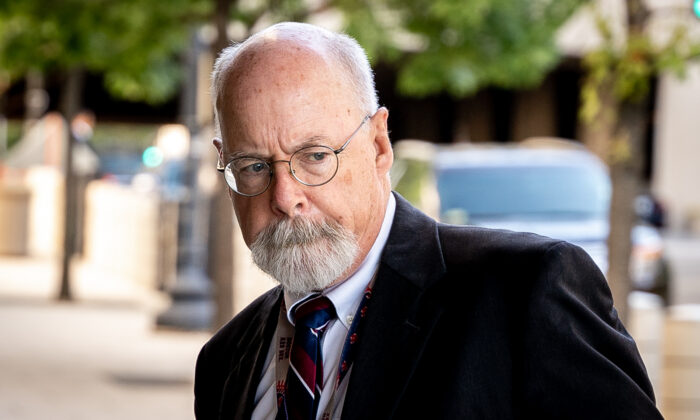 Special counsel John Durham is objecting to the proposed use of classified information by a key source for the anti-Trump dossier funded by Hillary Clinton’s campaign.

Durham filed the objection in court on Aug. 16.

The filing was under seal, meaning the contents aren’t visible to the public.

But the title of the filing says the objections concern the “use, relevance, and admissibility” of classified information.

It came after Igor Danchenko, the dossier source, advised the court earlier in August that he intended to use classified information in his upcoming trial, which is slated to start in October in Alexandria, Virginia.

That filing was also sealed.

Prosecutors asked for an extension in producing the rest, which was opposed by Stuart Sears, a lawyer for Danchenko.

Sears said his client needed time to review the classified documents and file the notice that he intended to utilize classified information in his defense.

Then-Attorney General William Barr appointed Durham, a former U.S. attorney, as special counsel in 2020, directing him to investigate people involved with intelligence activities associated with the 2016 election and the administration of then-President Donald Trump, including the FBI’s operation dubbed Crossfire Hurricane that was focused on alleged collusion between Trump associates and Russia.

Durham was also authorized to investigate the probe completed by special counsel Robert Mueller, which found no evidence of collusion.

Crossfire Hurricane was based in part on the dossier that ex-British spy Christopher Steele, who favored Clinton over Trump, compiled on behalf of the Clinton campaign and the Democratic National Committee. The dossier made a series of unsubstantiated allegations, a number of which have since been deemed false by U.S. authorities.

Danchenko, a Russian national living in the United States and one-time Brookings Institution analyst, was one of Steele’s sources.

Danchenko was charged in 2021 with misleading FBI officials when they questioned him about the sourcing of information he provided to Steele.

He allegedly claimed to have obtained information from Sergei Millian, a Belarusian American businessman. But the actual source was Charles Dolan, a longtime Clinton associate, described in court filings as PR-Executive-1 and identified by Dolan’s lawyer.

Danchenko’s lies were material because “the FBI’ s investigation of the Trump Campaign relied in large part on the Company Reports to obtain FISA warrants on Advisor-I,” or Carter Page, the indictment stated.