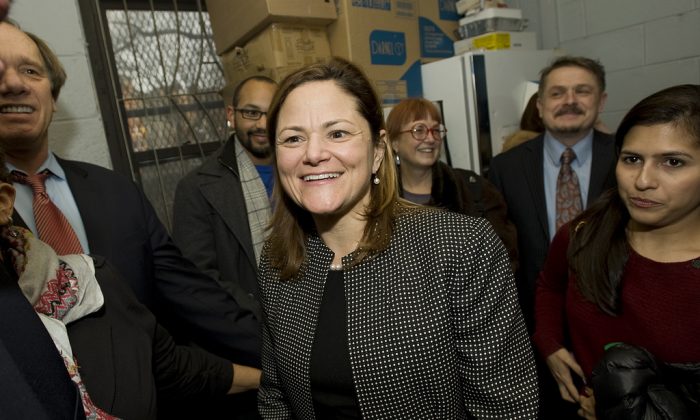 NEW YORK—New York City Council will select its next speaker Wednesday. The city’s second most powerful post is chosen by the council’s 51 members. For Mayor de Blasio, collaboration from City Council’s next speaker will be key to enacting his progressive plan for the city.

With the authority to set the legislative agenda, promote, or stall legislation, the council speaker plays a key role in determining which legislation becomes law.

The contest between Council members Melissa Mark-Viverito and Daniel Garodnick heated up Dec. 17 when New York-based City & State announced Democratic Party bosses of Bronx, Queens, and Brooklyn had solidified their support behind Garodnick. Party boss support is key because City Council members from those boroughs supporting Garodnick generally don’t vote against the will of their respective party chiefs.

The next day East Harlem Democrat Mark-Viverito announced signed statements of support from 30 members of City Council, and spoke of creating a more inclusive City Council.

Such signed statement of support are “hard to walk back,” said David Birdsell, dean of Baruch College School of Public Affairs. Birdsell presumes Mark-Viverito will be elected. Mark-Viverito is a graduate of the program.

Garodnick’s continuing candidacy may be an effort by those opposed to the mayor’s choice to win over some sort of concession from de Blasio, suggested Birdsell.

At the same time, reports have emerged almost daily in the last weeks attacking Mark-Viverito’s credibility on several fronts. These include her million-dollar wealth while at the same time presenting herself as part of the 99 percent, financial disclosures related to rental property she owns, and her leadership style.

With all the bad press she’s getting, public opinion may be swaying against city council speaker contender Mark-Viverito.

But that’s of little consequence since the public won’t be weighing in. Mark-Viverito only needs votes from 26 of the body’s 51 members to win.

A few reports have suggested that de Blasio has been applying undue pressure on City Council members to support Mark-Viverito.

De Blasio and Mark-Viverito have been working closely since his time on the council representing Brooklyn. They continued to work together during his time as public advocate before he won the mayoral election in November.

Both de Blasio and Mark-Viverito have strong ties to unions. Both have declared their commitment to progressive values and workers rights.

Mark-Viverito is of Puerto Rican heritage and supporters are highlighting the historic nature of her candidacy as the first Latina to hold citywide office.