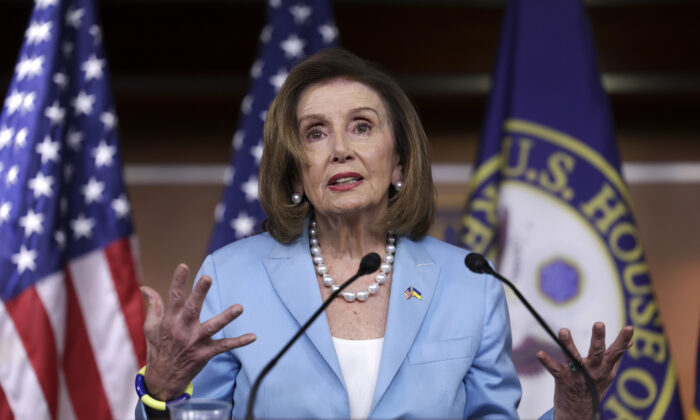 Speaker of the House Nancy Pelosi (D-Calif.) holds her weekly press conference at the U.S. Capitol in Washington on May 19, 2022. (Kevin Dietsch/Getty Images)
Democrats

The decision was announced by San Francisco Archbishop Salvatore Joseph Cordileone, who serves as archbishop for Pelosi’s home city.

“After numerous attempts to speak with Speaker Pelosi to help her understand the grave evil she is perpetrating, the scandal she is causing, [and] the danger to her own soul she is risking, I have determined that she is not to be admitted to Holy Communion,” Cordileone summarized in a Twitter post attached to a letter announcing the decision.

“There can be no more extreme example of … cultural depravity than when direct attacks on human life are enshrined in a nation’s law, celebrated by society, and even paid for by the government,” Cordileone wrote in the opening to the letter, published to the diocese website. “This is why Pope Francis, as much as any pope in living memory, has repeatedly and vividly affirmed the Church’s clear and constant teaching that abortion is a grave moral evil.”

“As the Archbishop of San Francisco, I am bound to be ‘concerned for all the Christian faithful entrusted to [my] care,'” Cordileone continued.

“This most serious duty can sometimes become unpleasant, especially when Catholics in public life explicitly promote practices that involve the direct taking of innocent human life, which is what abortion does,” he wrote. “I have struggled with this issue in my own conscience for many years now, especially with regard to the Speaker of the U.S. House of Representatives and member of our Archdiocese, Nancy Pelosi.”

“I have received letters from very many of you over the years expressing distress over the scandal being caused by such Catholics in public life who promote such grievously evil practices as abortion,” he continued. “I have responded that conversion is always better than exclusion, and before any such action can be taken it must be preceded by sincere and diligent efforts at dialogue and persuasion.

“Unfortunately, Speaker Pelosi’s position on abortion has become only more extreme over the years, especially in the last few months.

“Just earlier this month she once again, as she has many times before, explicitly cited her Catholic faith while justifying abortion as a ‘choice,’ this time setting herself in direct opposition to Pope Francis: ‘The very idea that they would be telling women the size, timing or whatever of their family, the personal nature of this is so appalling, and I say that as a devout Catholic’; ‘They say to me, “Nancy Pelosi thinks she knows more about having babies than the Pope.’ Yes I do. Are you stupid?’

“After numerous attempts to speak with her to help her understand the grave evil she is perpetrating, the scandal she is causing, and the danger to her own soul she is risking, I have determined that the point has come in which I must make a public declaration that she is not to be admitted to Holy Communion unless and until she publicly repudiate her support for abortion ‘rights’ and confess and receive absolution for her cooperation in this evil in the sacrament of Penance. I have accordingly sent her a Notification to this effect, which I have now made public.”

Cordileone added that he “take[s] no pleasure” in the decision, saying that Pelosi’s “advocacy for the care of the poor and vulnerable elicits my admiration … my action here is purely pastoral, not political.”

In concluding the letter, Cordileone wrote: “May God grant us the grace to be true advocates for the dignity of human life, in every stage and condition of life, and to accompany, support and love women who otherwise would be alone and afraid at a most vulnerable time in their lives.”

In the wake of a Politico article leaking the decision, Democrat leadership, including Pelosi, began a push to enshrine the right to an abortion in U.S. law.

The bill they proposed to achieve this, dubbed the “Women’s Health Protection Act,” was too radical even for some Democrats, and failed in the Senate over the objections of every Republican member in addition to Sen. Joe Manchin (D-W.Va.).

The issue of pro-abortion Catholics in public life has long been a headache for Catholic clergy, who have had to balance the demands of remaining politically independent while also upholding the rules of the Catholic Church, which is outspokenly opposed to abortion.

In 2019, a similar issue made headlines after then-candidate Joe Biden was denied Holy Communion at a Florence, South Carolina, Catholic Church over his support for abortion.

Pelosi did not immediately respond to a request for comment.